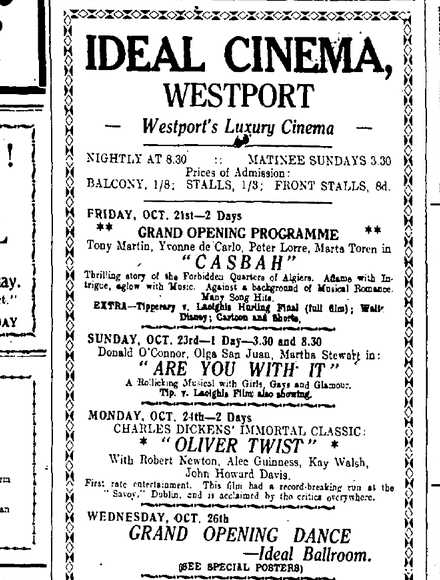 Located in Westport, County Mayo. The Regal Cinema was a conversion of the Grand Central Hall, which had been erected by Martin Fitzpatrick and Michael Flynn in 1937. Fitzpatrick later sold out to Michael Hoban and he and Flynn developed the building as a cinema. It was destroyed by fire in 1947 when Flynn parted company with Hoban leaving him to reconstruct what was left of it.

It reopened as the Ideal Cinema on 21st October 1949 with an RCA sound system and Ross projectors installed. The first film to be shown was Yvonne De Carlo in “Casbah” and there was a grand opening dance the following Wednesday, the cinema doubling up as a ballroom. It was later leased to Tom Tunney and then to Film House of Dublin but was latterly in the hands of the Kilroys, who ran the garage next door, who sold it to the local authority in 1996. It was still screening films in 1991 when “Arachnophobia” was advertised and after that hosted discos and a fashion show. According to a press report it was demolished in 1997 for a town centre car park.