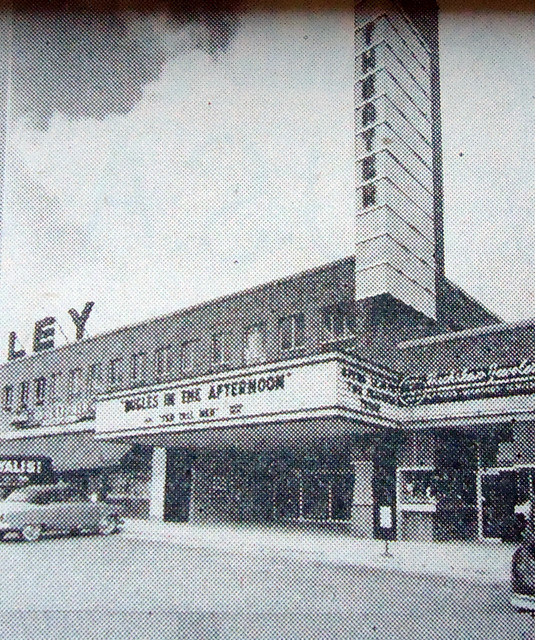 The Langley Theatre, Located in Langley Park, Maryland opened its doors in March 11, 1952 with Frank Lovejoy in “Retreat, Hell!”.

It was a single screen theatre with an auditorium of 987 seats, all on a single floor. It also featured a “crying room” for patrons who brought young children to the movies and would wind up disturbing other patrons. To accomodate the parents, they were ushered to the crying room so the parents could watch the film as their babies cried behind sound proof glass.

The Langley Theatre was one of the few theatres which utilized the ‘Sensurround’ sound system. In the 1970’s, a handful of films were released in ‘Sensurround’ which used large bass speakers during key periods in the film to cause the theatre to shake and vibrate. The films which were released in this format were “Earthquake”, “Midway”, “Rollercoaster”, and “Battlestar Gallactica”. The Langley Theatre also housed the Kintec Stereo system, a simulated stereo system for films that were presented with a stereo soundtrack.

The Langley Theatre was owned by the Kogat/Burka group (K/B Theatres). The theatre was a showcase theatre for the chain, featuring many first run exclusive engagements. The most prominent of the exclusive films were “The Godfather” in 1972 and “Star Trek-The Motion Picture” in 1979.

The theatre ultimately closed in the early-1990’s when K/B Theatres went out of business, ending the chain which had 26 theatres in the Washington, DC, Maryland and Virginia area during its hey day. The Langley Theatre was but one of K/B Theatres single screen gems, which also included, in Silver Spring, MD, the recently restored AFI Silver Theatre and the Flower Theatre (now a church), in Bethesda, MD, the Bethesda Theatre (now live shows) and the Baronet Theatre (demolished), and in the District, the MacArthur Theatre (now a CVS pharmacy) and the KB Cinema (now a furniture store), but to name a few.

Thanks KB for sharing your memories. ^5.

Worked for KB off & on from the late 60s through the late 70s, (ran the Crystal City from 71 to 73).. In Virginia & DC.. KB was the best employer of their time. The Goldman’s and Burkas treated their people well. Am still intouch with three of the managers from that period (Mary Booth died in 2009)

Sorry to hear about Mary Booth. I too managed the K-B Crystal for a few months in 1979. The last film I showed at the Crystal before K-B and I parted company was “Dracula,” with Frank Langella.

I worked at the Langley Theatre from 1972 until about 1975. it was a great group of guys, most of which i still see. Bobby Hajjar, Jan Erman, David Wolf. There are many i wish i could find again, Maruice Jackson, Stacy Bates, Jimmy P…if any of you are out there gimmie a shout.

Thank you for the additional information. I couldn’t ever be 100% certain that the pink glass mirror tiles by the drinking fountain were at Langley, or Hyattsville.

Thanks for the wonderful memories I never worked for KB but i actually grew up in Takoma Park from 1975-1988. I remember as a child going to see ROLLARCOASTER, STAR WARS and Superman 1 and 2. I also remember movies that i was to young to see but wanted and remember the movie poster in the glass case at the KB Langley : CARRIE and BODY HEAT hahahah I also remember going to see SHarky’s Machine. As i got older and especially in High school it seemed that everyone started going to Beltway Plaza. I remember the C2 Bus right on University BLVD would take you straight to the mall. We also went to Flower Twins and the movie place on Georgia ave in silver spring.

Also does anyone remember the movie place in DC and VA back in the 80’s that use to show the first run kung fu blockbusters. They would show a lot of Shaw brothers movies. I cannot remember the name of the theater but i remember seeing it in the Washington Post movie section as a kid.

Linkrot repair: The May 3, 1952, Boxoffice article about the Langley Theatre has moved again:

The Hot Shoppes! That brings up a memory. That was where the new bus station/stop is currently set up, that displaced a Taco Bell that was there for years. You remember the Grand Union super market at the left end? :) My family loved the rotisserie chicken they used to make and the waft of it as you shopped in the store.