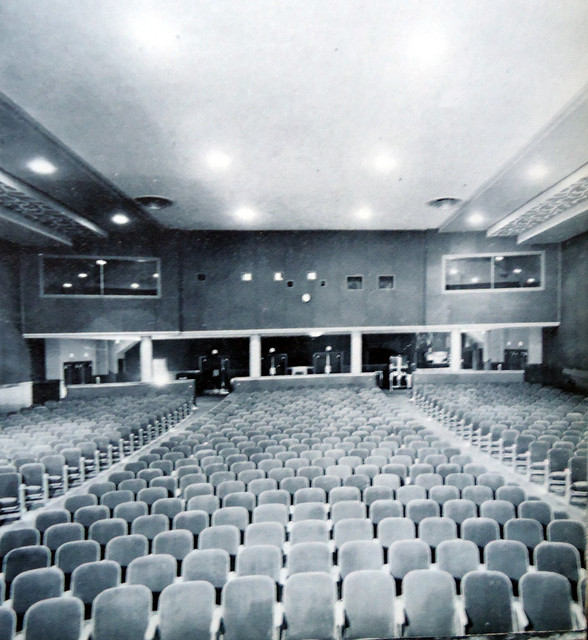 This impressive Streamline Moderne jewel by architects John J. Zink and Frederick L.W. Moehle was opened on February 15, 1950 by the K-B Organization. The opening film was Bob Hope in “The Great Lover”.

K-B closed the Flower Theatre in 1979. It was taken over by an independent operator in 1980 and was twinned, re-opening on September 26, 1980. In 1983 two additional screens were built next to the original theatre. The two small theatres closed in May 1995 and the Flower Theatre closed in January 1996 because of flooding. It then become a church.

The church moved out in early-2008 and the building was ‘For Lease’. By March 2016 another church were leasing the building.

Just FYI. The immediate area has a Hispanic population. Further up Flower Ave going towards Silver Spring are more family oriented single-family folk. On the other end you have singles, couples and small families in rental units; apartments, duplexes, etc until you run into Columbia Union College, a Seventh-day Adventist run institution, with of course, college aged more conservative leaning, but are generally, an open minded group and then the SDA church, itself.

As you know, the AFI is in the next town over. While their programming is decent, they seem to run the same ‘classics’ every year. More 70mm would be nice, but I suspect the catalog availability would be scarce and would probably require the the theater restoration to that of a single screen, unless you twin the upstairs to a smaller screening-type room.

Good luck with your plans, as I hope they come to fruition. It would be nice to have more variety programming in films than Hollywood fare and the AFI.

A glimpse of the auditorium of the Flower Theatre on the cover of Boxoffice, October 7, 1950.

I never knew the theater was that large in its original state. I only visited the venue as a twin as posted above. I notice the ‘flower’ design on the wall, hence the name! Looking back in that picture, there was at least one crying room. Interesting! Thanks for the picture link, Joe.

What a dump this was. Went there mostly when it was a cheapie theater… rats running around… the screen in one theater was literally cut in half by expanding to 4 screens. One theater was the size of a bathroom. At least the movies were cheap and I remember the food to be inexpensive.

I remember in high school going with friends to see the horror movie witchboard summer 1987 and i also remember going to see Prince concert movie sign of the times. LOL

The Boxoffice Magazine cover with the photo of the Flower Theatre’s auditorium that I linked to in an earlier comment has been moved. See it at this link.

According to Friday’s, 8/3/12 edition of the Washington Post, there is a community meeting Sat, 8/4, to discuss the future of the theater and possible uses.

I’m thinking if it ever were to show movies again, aside from the necessary upgrades and ADA compliance, you’d have to have more then one screen here. Perhaps 3. The configuration could maybe support the main auditorium restored but capacity reduced from the original 800 to say, maybe 500. The crying rooms upstairs could be converted to the two additional screening rooms if they can be expanded to accomodate comfortable seating and larger screens.

Driving by the theater the other day, I noticed that a Spanish language Pentecostal church is renting out the place as of now. The second pair of glass doors is painted over with Spanish words, while the right pair is open. Maybe one day, I’ll take some pictures if I can see deep inside. :)