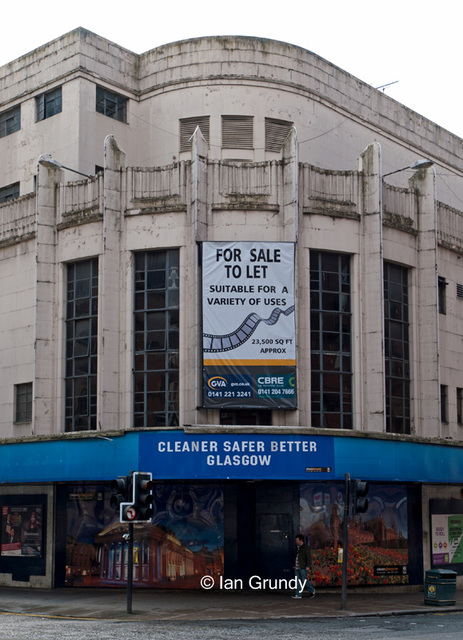 Opened on December 31st 1934, the Glasgow Paramount Theatre was one of the later cinemas built for the American based chain in Britain. The architects were Frank T. Verity and Samuel Beverly, who designed many of the Paramount Theatre’s in the UK.

Glasgow’s was freestanding, and occupied half a city block. The façade was built in white granite, with five two-storey finned windows curving around and above the corner entrance. At night, the entire building was outlined in neon.

The main foyer had an open staircase and upper foyer, which looked down onto the ground floor, and was home to a tea room and restaurant, situated under the tall corner windows. A further café was situated upstairs from the main restaurant.

The auditorium seated 2,784 in the circle and stalls, and was originally coloured green, copper and silver. The stage area was spacious, with a tall fly-tower, and around fifteen dressing rooms at the rear of the side elevation and under the stage. A Compton 4Manual/10Ranks organ rose from this under-stage area.

In 1939, the Paramount Theatre, along with all other UK Paramount’s, was sold to Oscar Deutsch’s chain of Odeon Theatres Ltd. and was re-named Odeon. Under this name, it continued successfully until 1970, with live shows augmenting the film presentations. The Rolling Stones played there, as did The Beatles supported on the bill by Roy Orbison. Duke Ellington and his Orchestra appeared in concert in the late-summer of 1969. The Odeon was closed on 13th September 1969 to be remodelled into a triple screen cinema.

The Compton organ was removed and by January 2004, the console was being housed in Summerlee Heritage Museum in nearby Coatbridge. It has now been shipped to a private residence in the USA. The remodelling involved stripping almost all of the Italianate interior out and creating 3 screens - one in the former balcony, one in the stalls (both seating around 1,100) and a smaller screen in the former stage area. This latter screen, seating 555, was formed over two levels, with a small circle, and had a separate entrance to the rear of the building. The foyers were remodelled too, with the double height sections being floored over, and the staircase realigned. The cafes were walled off to become offices and staff areas, and a bar was placed in the top foyer, although the view from the corner windows was now blocked.

The exterior suffered then too, the corner windows and fins being hidden behind a giant, full height readograph, lit from behind, and with corrugated metal sheeting covering much of the granite around it. It reopened as the Odeon Film Centre on 2nd October 1970.

In 1988, the screen in the stalls area was further subdivided into three screens, of around 220 seats each, and the smaller Screen 3 was split horizontally to give a total of six screens. Access to all screens was now from the main entrance. A further subdivision in 1999 saw the 1,100 seat Screen 1, in roughly the former circle, divided into four screens, bringing the total to nine. The current Screen 1, at 555 seats, is now the largest in the complex. This refurbishment also saw the bar being removed and, happily, the exterior restored to something like its former glory, with the removal of the readograph and the corrugated sheeting.

Sadly, only a few years later, the future seems uncertain, as Odeon sold the building in March 2003 to developers. On 29th March 1995, Historic Scotland afforded the building a degree of protection with a Grade B Listed building status, but this seems only to apply to the façade. It is listed in the Buildings At Risk Register.

The cinema closed on 7th January 2006, and plans call for the demolition of the interior to be replaced with shops, restaurants, and a nightclub. The façade is supposed to be restored to its 1934 appearance. The auditorium was demolished in March 2013 and was replaced by a hotel & office block, with the front of the former Odeon and its foyer spaces becoming the lobby of the hotel.

A new scheme was passed by Glasgow City Council in November 2007 which involves demolition of the auditorium block, to be replaced by a 9-storey glass tower. The entrance block will apparently be restored to an approximation of its 1934 opening appearance.

Some promising interest shown from Sir Cameron Mackintosh into making this cinema into a Theatre.

The organ from the ODEON is now in the U.S in a private house.

Again seen a few films here LIVE AND LET DIE The ADAMS family Manhattan and the last film i seen there was Jackie Brown, other one of Glasgows great picture houses.

The Odeon Glasgow closed on Saturday September 13th 1969 for reconstruction into three cinemas. Originally intended to take six months, the work lasted over a year and the new Odeon Film Centre reopened on Friday October 2nd 1970 (Gala Opening) and to the public the following day.