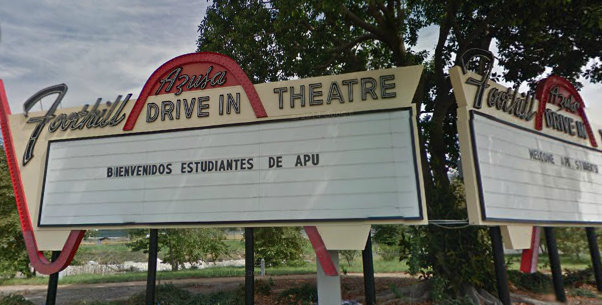 Pacific Drive-Ins and Edwards Theatres announced in a Los Angeles Times ad on December 20, 1961, the opening of the Azusa Foothill Drive-In and its attractions Disney’s “Babes In Toyland” and “Misty”. This unique partnership would make it Pacific’s 42nd location in the Los Angeles area.

As to Edwards' contribution to this agreement, it was probably the land as James Edwards II had invested in real estate in the San Gabriel Valley since he opened his first theatre in 1930.

After more than 40 years the Azusa Foothill’s last full night of operation began on December 28, 2001 with “Harry Potter And The Sorcerers Stone” and “Ocean’s Eleven”, with the swap meet closing early the next year.

The Los Angeles Conservancy says that the Azusa Foothill is the last remaining drive-in on Route 66 west of Oklahoma, and according to county records, its land on which Azusa Pacific College plan on expanding their campus is assessed at $6,372,000.

In February of 2002, the California Historical Resources Commission declared it a state landmark, despite a vote by the Azusa city council of 4 to 1 against it. The city of Azusa says that the university has a $20.9 million impact on Azusa. For it to be added to the California Register of Historical places the owner of the property, as required by law, would have to consent. The Los Angeles Times says that because of the landmark designation the owners now have to study environmental effects, examine alternative uses and produce evidence to justify the approval of any project by the city council.

As of December 2003, according to the city website, Azusa was still reviewing the specific plan for the future expansion of the university.

Good marquee,glad they are going to keep it.

Hey, it was a great place..Its very wierd driving past, and seeing only the marquee…but I agree it’s great they are keeping it.
I remember the swap meets on the weekend, back in the late 60’s and 70’s Many fine items for sale!It was THE swapmeet to go to.

Grand opening ad has been uploaded in the photo section

Remember driving by in 2000 or 2001 and the marquee, the fences, everything looked so well cared for, I thought: Well this one should be around for a lot more years, how wrong I was.

Does anyone remember the Tuesday night specials at this drive-in?

I went there many times in late ‘70’s and early '80’s Saw John Carpenter’s, The Thing there. That was fun. Saw the Bond film with 'Jaw’ in that one.

The bond film with Jaws(Richard Kiel) was either “The Spy who loved me”, or “Moonraker”. The Azusa FootHlll Drive-in sign appeared briefly at the beginning of an episode of Storage Wars!

Both, actually. The producers liked the character and actor enough to bring Jaws back for a second film.

Richard Kiel also appeared as Jaws at the 1981(or 1982?) Academy Awards, while Sheena Easton was singing the Oscar nominated song “For your eyes only”(it didn’t win, it lost out to “Arthur' theme – The Best you can do”), it’s on Youtube!