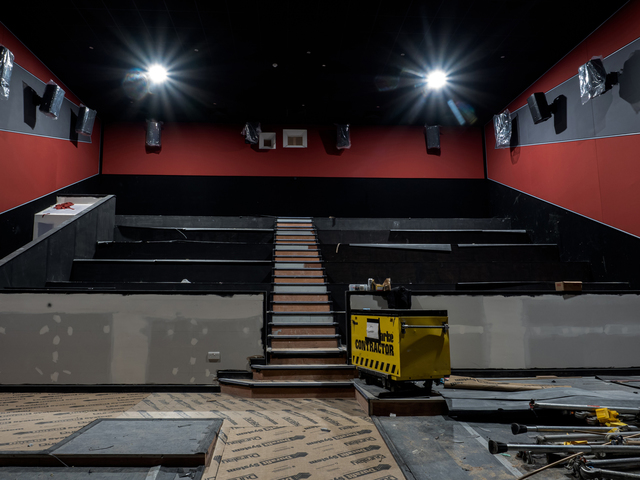 Built alongside the site of the former Reel Cinema on a former rough car-park and a dilapidated day centre, the Savoy Cinema in Grantham, Lincolnshire has been promoted by South Kesteven District Coucil and leased to Savoy Cinemas (Nottingham) Ltd. Savoy also operate cinemas in Nottingham, Boston, Corby, Worksop and have started building work in Doncaster (due to open 2020).

The purpose built multiplex was designed by NBDA Architects, constructed by G F Tomlinson Group Ltd., and fitted out by Lindum Group Ltd. Work on clearing the site began in January 2018, the Reel closed in April, was demolished in June, and the Savoy opened with a private invitation only event on Thursday 18th July 2019 when “The Matrix” was screened, with public screens following on Friday 19th. Opening films include Disney’s “The Lion King” on the UK date of release, along with Pixar’s “Toy Story 4”, Marvel’s “Spiderman – Far From Home” and supernatural horror “Annabelle Comes Home”.

There are five screens all in stadium format with a total of 701 seats, there are 184 in screen one, 167 in screen two, 118 in screen three, 141 in screen four and 91 in screen five. Screen one includes the first UK installation of the new Barco Series 4 laser projector in the UK, complemented with Dolby Atmos immersive sound to launch the new Vertex 4K format.

A spacious foyer opens onto a new public realm pedestrian square linking the Cinema to the Guildhall Arts Centre and St Peter’s Hill in the town centre.

There is additional office and restaurant space within the complex, as yet operators have not been confirmed.

An album of photographs showing the former Reel Cinema, its demolition, and the construction of the Savoy Cinema can be found here:–