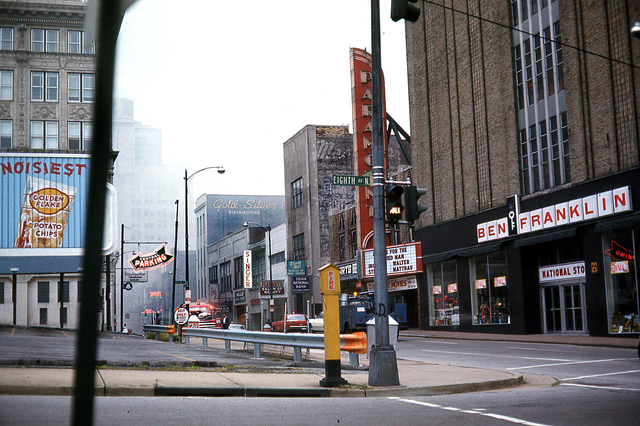 This was a “hardtop” theatre designed by famed theatre architect John Eberson in an Art Deco style. It is mentioned in passing in Ben Hall’s book “The Best Remaining Seats”. The Paramount Theatre opened on November 14, 1930. My mother remembers the Wurlitzer organ which was opened by organist C. Sharpe Minor (Charles Sharpe Minor), was still in use during World War II when she was going to the movies. By 1950 the Paramount Theatre was operated by Crescent Amusement Co. It was still open in 1957.

Nashville had several big movie palaces downtown, three on Church Street. All have been razed. The site of the Paramount Theatre became a parking lot. In 2019 a courthouse was being constructed on the site.

The new US Federal Courthouse is being built at 8th and Church St. The Paramount was the second building from the corner (it closed in 1979) and its' building footprint will be included in the Courthouse building.

The park you mentioned is across Church St from the entrance to the demolished Loew’s.Theatre. There was to be a Hotel/Condo combo built there, and it was to be called The Paramount, but those plans are on hold.

New page for the Midtown Theatre, which had opened by 1977 in the Singer store space seen left of center in the Overview photo for the Paramount at the top.

The new courthouse on Church Street between seventh and eighth Avenue will take up the entire city block due to a requirement since Oklahoma City bombing of that courthouse, The former Paramount theatre is within this block which means the courthouse will be on top of where the Paramount theater was located. The two older buildings still on the lot on eighth Avenue, where the former Hammond organ dealer was, will be staying.

Church Street Park, between Capitol Boulevard and 6th Ave. North, which is across from the public library, is where the Paramount tower was planned. To learn more about what’s happening in downtown Nashville go to the UrbanPlanet.Org and select Nashville. There is a thread on the link for the Paramount and the courthouse .

DavePrice and DavidZornig, Last year you were mentioning, above, the park that is bordered by Church, North 6th and Anne Dallas Dudley (a.k.a. Capital Boulevard). In the June 26, 1915 Moving Picture World magazine there is an announcement for a new theater, planned for that site or possibly the adjacent parcel. I was wondering if either of you had run across this.

This is the first paragraph of the article.

“ William H. Wassman, Nashville’s pioneer motion picture man, is preparing to erect what is declared will be one of the finest and safest motion picture theaters in the country, and the first house in Nashville to be built from the ground up. The building will be on the west side of Sixth avenue. North, and just north of Church street, extending back to the Capital boulevard, on the property owned by the Sixth Avenue Property Company. The plans, which are being prepared by Marr & Holman. Nashville architects, call for a three-story building which will be the last word in theater construction.”

I’m not finding a Cinema Treasures listing for this hall. Certainly there were innumerable theatre building projects announced which came to nothing, but since this article mentions which architect is preparing the plans it would seem to have some legitimacy.

Read the comments on the Capitol page below. One mentions an Oddfellows Lodge at 6th & Church.

The SE corner of 6th and Church was – I believe- OWNED by the Odd Fellows. When the old Capitol building was replaced with what was then called the Warner Bldg, they had a Lodge on the top floor. I don’t know what arrangements were made when the new building was erected.

Will: Wassman built the Knickerbocker which extended thru from Capitol Blvd (then so called) to 6th Avenue- Later Crescent bought it. When the theater was being torn down Wassman’s name could be seen on the main beam of the building.

I had a friend who attended this opening and he said he was pushed against the ticket window so hard by the crowd that he couldn’t get away from the window to go inside.

Thanks, Dave. I tried to load a picture of C Sharpe Minor, as well as the restored Wurlitzer,, but the system was having issues.