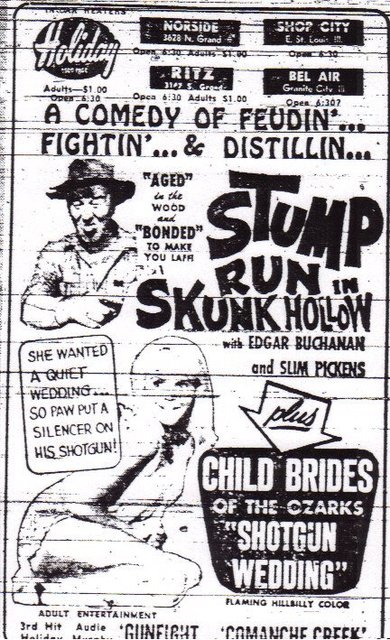 Another neighborhood house built by Komm Theatres, one of the more elaborate in that chain. A single floor theatre but with a high domed roof. Located at the busy intersection of North Grand and Natural Bridge. The Norside Theatre had a Gothic facade and very large marquee with tons of lights and neon, lighting up the entire intersection at night.

It was opened October 1, 1936 and was located two blocks in either direction east and west from two of the larger high schools in the north side of the city. Medium sized lobby with terazzo floors and large concession area with two crystal changeliers lighting the lobby. Three aisles led into the auditorium two on the sides and one down the middle. The walls were lined with painted and lighted murals and the draperies over the stage area were a forest green velvet. The auditorium floors had a good slant and the glider seats made a perfect view of the screen no matter where you sat. One large chandelier in the main auditorium with wall lights above the murals.

The Norside Theatre was a favorite and did big business until the demographics of the neighborhood changed and the theatre closed quietly in September 1969. It was later demolished and a fast food restaurant was later built on the site.

Theatre closed September 14, 1969. Ad in the paper the following day read “Closed for Remodeling.” Where have we heard that phrase before?

For some reason I don’t remember the Norside, even though I resided in the area as a child during 1959-1966. I do remember a Leonard Muntz TV store (“Uncle Leonard”, a sort of Steve Mizerany guy) that may have been next door, and a drugstore/soda fountain across the street (where a competing gas station is now). I don’t remember what was on the opposite corner (where the infamous White Elephant Car Wash later stood… plenty of drug deals and shootings there. Shut down by the city and is now the site of an Aldi Foods).

Opening night of the theatre was October 1, 1936 with a double-bill of “The Devil-Doll” and “We Went to College”. Newspaper coverage then gave a seating capacity of 1200.

In order to build the Norside, a night club on the site was demolished. This nightclub at one time was a movie house, the North Grand, which operated 1910-1922.

Sam Komm did not build the theatre, but he did take title to the structure in 1947.

I believe that Leko Realty was the original owner of the Norside Theatre. Sam Levin was the attorney for the Realty Co.