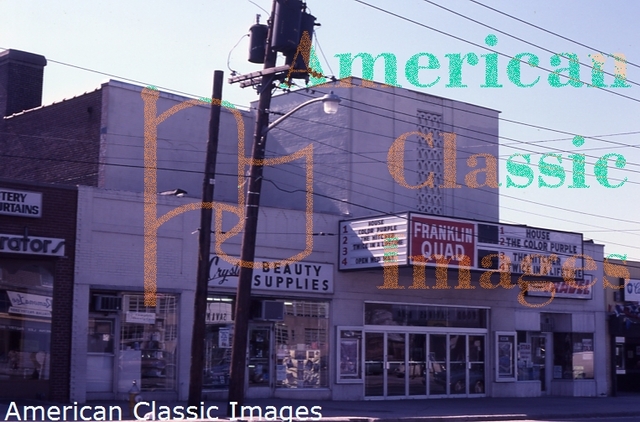 In 1996 it was taken over by Clearview Cinemas. In June 2013, Bow-Tie Cinemas took over as it took most Clearview locations. Bow-Tie transitioned this theatre to an independent operator as of November 22, 2019. It was closed by August 2020.

Upload a photo of the current façade. Would be nice to see one with the original marquee.

Once again some miss information The Franklin and Squire were both owned by Warren Whurtzberger who did the conversions using money he borrowed from Boston Concession as he was in financial trouble in 1996, he sold both to Clearview Cinemas. Bud Mayo and Paul Kay were 2 independent theatre owners though Bud had also been a Vice President for IBM for a long time in 1993 they started with 2 theatres in N.J. and in 1995 they brought 3 theatres in Long Island from Carmi Djiji called GG cinemas at the time , the Port Washington, Herricks and Grand Avenue, who I worked for and then we started buying independent theatre’s in New York and New Jersey as ell as buying smaller venues from major chains. There were no Loew’s people in Clearview at that timein 1998 we took over theatre’s from Cineplex which included Soundview Cinemas The Chelsea and a few more at that time we got a division manager from Cineplex It wasn’t until Bud sold to Cablevison and then left the company that we had people from Loews brought in to run the company in 2001. I was the Division Manager for Long Island and was part of building up the company from 1995 to 2001 when I left to form my own company in Florida with 2 partners. I started in the theatre business in 1970 as a concession attendant and by 1973 I was the asst. Manager of the U.A. Quartet in Flushing, then in 1975 I was the Manager in 1979 I went to work as an Asst. Manager at National Amusements Sunrise Cinemas for it’s opening raising to House Manager then I was put in charge of the construction site for National Amusements Commack Multiplex and then opened it as the Managing Director before being transferred to Whitestone Multiplex Cinemas. In 1991 I went to work for GG theatres as the Manager of Port Washington and District manage4r for the other 2 GG theatres and when Clearview took over in 1995 I continued as their District Manager for L.I. and as previous mentioned, I was very much involved in their growth into a 68 theatre chain. I would go to each theatre that was taken over and help to bring it online as a Clearview Cinema and for a while I was also in Charge of Concessions and Special Events for the company

I was the screen cleaner for clearview for a few years from about 1997 till 2004. I must have cleaned many of the screens in your theatres.

Please update, it became a twin in 1980, a quad in 1985 and in 1995 a sixplex. Warren Whurtzberger made it a sixplex in 1995, not Clearview Cinemas. Clearview CInemas bought the Franklin Square and Squire in 1997 after they bought GG Theatres.

When Clearview took control of Franklin Square, it was already 6 screens.

Went to the theatre on Sunday morning 11/24. We were going to an early Frozen II screening. When we went in they were replacing signs and a little hectic. They had cancelled all morning shows and the (very nice) staff said the theater had been purchased by a local family run business and will be up and running again later in the day. I haven’t heard anything since, but hopefully this is good news and this company will keep it running past the next three years when their lease is up. It’s a nice little theatre. It’s old, but so homey and enjoyable instead of these megaplexes.

The Town of Hempstead granted Landmark status to the theater on October 2, 2019 which assures that it will not be demolished. It is one of the few Art Deco structures left in the town. Although those elements are probably no longer internally visible after it was chopped up into six auditoriums, the facade, despite the marquee change, is representative.

Looks like the new owners are JJ (Bellmore Playhouse, Elwood).

The pandemic is going to play havoc on the number of theaters that will emerge.