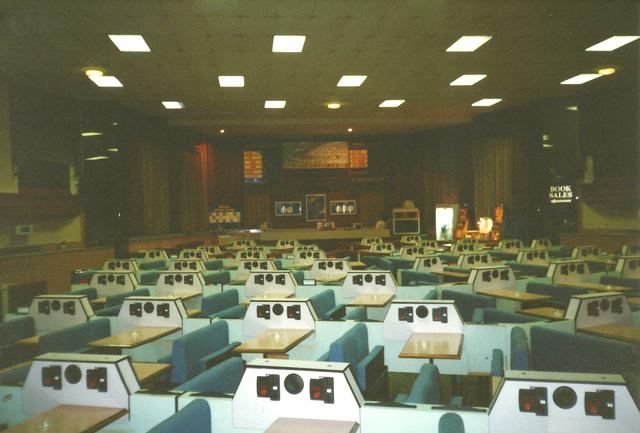 Following the take over of Union Cinemas by Associated British Cinemas, a number of theatres planned and started by Union opened under the ABC control, including the Ritz Cinema in the West Yorkshire town of Keighley, which opened on 28th February 1938.

Seating 1,526 and provided with a Compton 3Manual/5Rank organ and small variety stage the Ritz Cinema was the most luxurious theatre in the area and it even had the facility of a café-restaurant which seated 100. It was designed by the well respected firm of Verity & Beverley with Sam Beverley acting as the chief architect for the scheme.

It was renamed ABC on 30th July 1971 and showed its last film on 2nd February 1974, its end apparently hastened by the fuel crisis which crippled the UK at that time.

Eventually it was converted to bingo becoming a Gala Bingo Club and remains in that mode from June 2018 as a Buzz Bingo Club. A false floor has been constructed at balcony level but above that the Ritz Cinema auditorium survives unaltered. Alice Street is a side road near to the town centre but just far enough off the beaten track - so the site has not yet proved attractive to developers.

The ABC, photographed in February 1974, just after closing as a cinema:
View link

My father, Alfred Busfield, used to be a projectionist here in the 1950s, I used to be a member of the ‘ABC Minors’ club.