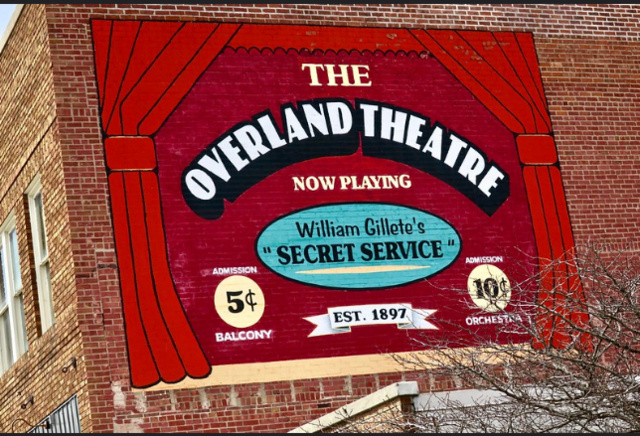 The Overland Theatre was opened in December 1897. By 1926 it was operating as a movie theatre. It was still open in 1943, but had closed by 1950. It operates today as a learning centre River Country Nature Center.

According to information in a thesis paper submitted to the University of Nebraska entitled “Where Life is Simple and Passions Moderate”, a history of Nebraska City, Nebraska 1900-1910 by Thomas L. Boeche, an Overland Theatre (presumably this one) was opened at the corner of Sixth Street and First Corso in December 1897 with a production of William Gillette’s “Secret Service”. I have uploaded a reproduction of a building ad for that production.

The Overland was originally used for live productions and had, according to Cahn’s Official Theatrical Guide - 1909-1910, a proscenium 28 feet wide and 22 feet high in a building which had a width of 52 feet. It was well equipped with a bridge, scene room and three traps. Overland Amusement Company was the lessee and Charles Rolfe the Manager. Admission varied depending upon the attraction.

According to the afore-mentioned thesis the first dedicated movie theatre in Nebraska City was opened in 1907 on Central Avenue by Schnitzer and Wallen (admission 5 & 10 cents) and a second, the Fairyland in 1908.

I have also uploaded an ad from the July 12, 1900 Nebraska City “The Conservative” in which the address for the newspaper is listed as the Overland Theatre Block.

Despite being considered a “landmark” by locals the Overland fell into disrepair at the end of its life.

Uploaded a photo as the River County Nature Center.