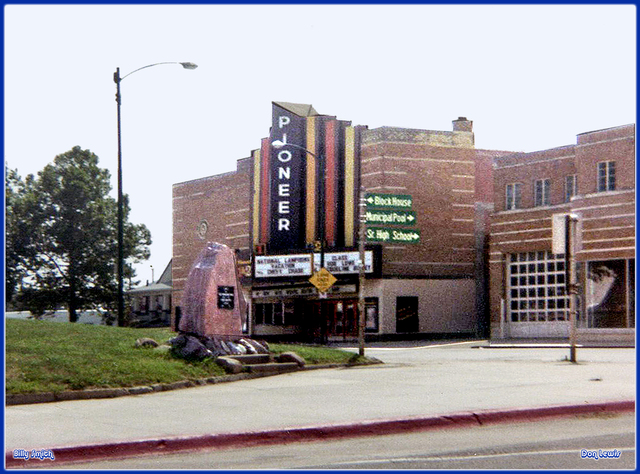 Just saw a shot of this theatre in the movie About Schmidt
with Jack Nicholson. Sure Looks like it.

Here’s a picture of the Pioneer. (middle of the page)

Here is an article about the opening of the theater dated 2/10/49:

The formal opening of the new Pioneer Theater at Nebraska City, Neb., which was attended by Mr. and Mrs. John Newcomer and Mr. and Mrs. John Irvin of Chillicothe, was a matter of definite interest to the Chillicotheans as the construction of the Pioneer is very similar to that of the new theater under construction here. They were quite impressed. Both the Griffith theaters are of the “stadium type,” which does away with the need for a balcony. About half way back in the auditorium a “ramping” effect of the rows of seats begins. Under the back section is a sunken lounge, with a foyer in front of the lounge and the lobby in front of that.

Murals done in “black lighting” gave an outstanding effect to the auditorium, Irvin found. The local murals will be 14x30 feet on either side and are to depict a local or area scene or one in keeping with the name of the theater. The Nebraska City theater seats about 900 persons. The Chillicothe theater is to seat about 1,050. “If our theater is as nice as that one it will be one of the outstanding theaters in all North Missouri,” Contractor Irvin said. Some refinements in the local plans may be made, based on what was learned in constructing the Nebraska house. Irvin said he hoped to outdo the work in Nebraska.

A 1983 view of the Pioneer Theatre in Nebraska City.