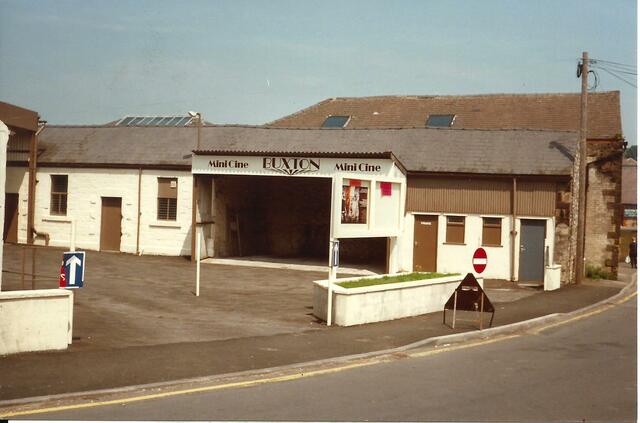 In Buxton, Derbyshire, following the closure of the town’s only cinema, the Spa 1 & 2, in May 1986 (see separate Cinema Treasures entry), Michael Bradley applied for planning permission to convert the disused ‘Flowflex’ storage building and Kennings' former tyre depot into a two-screen ‘mini’ cinema complex. It was intended that the auditoriums would seat 60 and 40 patrons.

His application was lodged in November 1990. A petition in support gathered 1,000 signatures, and planning permission was granted in January 1991, despite some reservations about the site, a rather cramped location which was not on the main visitor/tourist route, and which was flanked on one side by a 60ft high railway embankment. Although closed to passenger traffic, the line was still used several times a day for moving limestone, giving the location something of a “Smallest Show on Earth” feel!

Despite Michael Bradley hoping to have the cinema open by Easter 1991, the work was delayed for reasons that are not clear, and the Buxton Mini Cine eventually opened on Friday 21st February 1992 with Disney’s “Rescuers Down Under” during the day and “Other People’s Money”, starring Danny DeVito, in the evening.

These films were showing in the 78-seat Cine One. Mr Bradley said he “hoped to get started on Cine Two in the near future”.

Sadly, Cine Two never appeared, and the cinema (by then renamed Moviehouse) closed on Thursday 15th April 1993, with “Sniper”, starring Tom Berenger. This was only fourteen months after opening; despite the 1,000-signature petition, Mr Bradley said “there’s just no call for a cinema of this size in Buxton anymore, as I’ve found out to my cost” - although delays in getting the blockbuster releases certainly didn’t help, and there was always that rather awkward location. It also couldn’t have helped that he had no prior experience of operating a cinema.

However, just one month later, the lease on the Moviehouse was taken over by Face Alpha Ltd., a Burnley-based company with eight other cinemas. Managing director Robin Price was confidant that his company, being a circuit, could obtain ‘first run’ releases on day and date, and therefore succeed where Michael Bradley, an independent operator, could not. Mr Price said that work had already started on the second screen, and that the site could accommodate as many as four or five screens.

Sadly, despite Robin Price’s optimism, the further screens were never built and the Moviehouse closed again in January 1995. The operator by that time was Keith Bradley; it is not clear whether he was connected to Face Alpha or whether he had acquired the lease from that company.

The final screening, of “The Specialist”, starring Sylvester Stallone, was on Thursday 19th January 1995. Mr Bradley also remarked that audience figures were so low that it appeared there was no need for a cinema in Buxton.

Permission was granted to convert the site into a retail unit for the building trade, selling kitchen, joinery and plumbing goods. In July 1996 an application to replace the buildings with housing was rejected due to the constricted space, the noise from the adjoining laundry - and that adjacent railway line!

By June 2011 the site was occupied by Inside Out Buxton, a kitchen, bathroom and tile studio showroom.