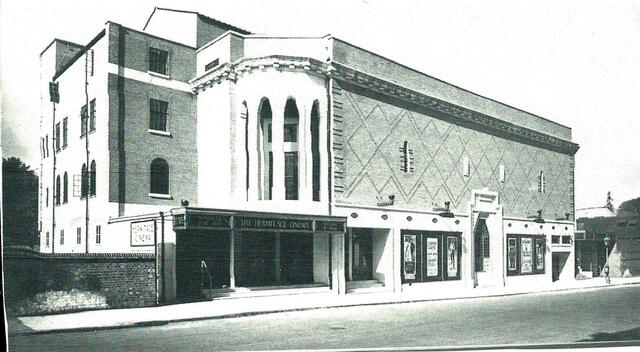 In Hitchin, Hertfordshire, the Hermitage Cinema, named after the road it stood on (with its very conspicuous, wide frontage) opened on Monday 29th February 1932.

There were 1,386 seats: 754 in the stalls and 632 in the very large balcony. There was generous foyer space, and an extensive queuing area inside the building off each side of the stalls where 750 patrons could wait - half of them seated - for a place to become available.

The Hermitage Cinema had a full-size stage, orchestra pit and a dozen dressing rooms - but no organ.

The stage was often used for live events, especially Christmas pantomimes and variety shows, but the installation of CinemaScope in the mid-1950s prevented further theatrical use. (The 1953 Kinematograph Year Book lists 1,317 seats.)

The building was demolished and replaced by a Post Office which has itself since closed.