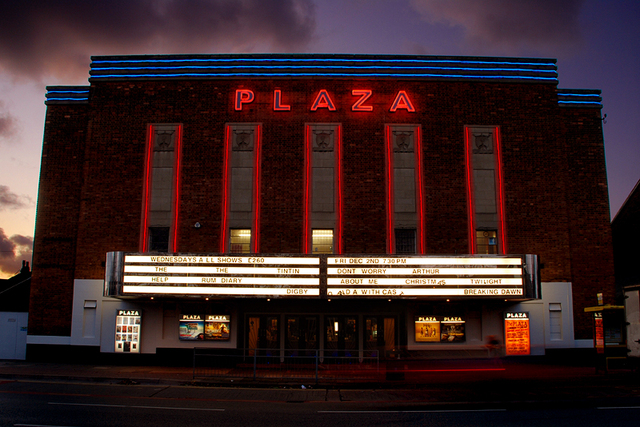 A survivor in the Liverpool suburb of Waterloo, south of Crosby, the Plaza Cinema opened on 2nd September 1939 with Edna Best in “South Riding”. Due to World War II breaking out on that day, the Plaza Cinema holds the distinction of being the only cinema to open and close on the same day. (Public buildings including cinemas and theatres were ordered to close by the governement, but this order was rescinded after a couple of weeks).

It was designed by architect Lionel A.G. Prichard and built by Ernest Spencer & Company of Aintree for the independent operator Crosby Entertainments Ltd. It was equipped with a Compton 3Manual/5Rank + melotone unit theatre organ with a fixed illuminated console, which was opened by organist George Dawson.

The Plaza Cinema has been through several ownerships over the years. In 1943 it became part of Oscar Deutsch’s Odeon Theatres Ltd. chain and was re-named Odeon. Classic Cinemas Ltd. took over on 10th December 1967 and it became the Classic Cinema.

It was converted into a three screen cinema in August 1976: (1: 650 seats, 2 & 3: 103 seats each). Screen 1 is most impressive retaining the feel of the original cinema using the circle and front stalls area. The Screen’s 2 & 3 additions are tucked away out of sight under the balcony. Classic Cinemas were taken over by the Cannon Group in May 1983 and it was re-named Cannon. Taken over by Apollo Leisure Ltd. in March 1990, it was re-named Apollo. They announced its closure in 1996 and it closed on 7th November 1996. A groundswell of public opinion saved the cinema and it reopened as the Plaza Cinema on 18th July 1977. The Plaza Cinema is now operated by a charity and is supported by teams of unpaid volunteers who help to keep it operating as a true ‘community’ cinema.

In October 2018 it was announced that the Plaza Cinema would have an organ again. It will be the Wurlitzer 3Manual, 8Ranks organ (with ghost piano) that was originally installed in the Ritz Cinema(later ABC), Ipswich in January 1937. In June 1973 it was removed from the ABC. In the 1980’s it was installed in the Hollywood Plaza Cinema, Scarborough, but in later years got very little use. Installation will begin in early-2019.

This from their website:
The Plaza Cinema is delighted to announce that it has secured funding of Â£50,000 from the Big Lottery Fund People’s Millions. The money will be spent on a complete facelift for the building.

Thanks for your support! We won the grant in a head-to-head vote announced on Granada Television. We are grateful for the many telephone calls from our supporters, which won us the vote.

Here’s some history from theater website:
There has been a cinema on Crosby Road North in Waterloo since 1939. For over 60 years the local community has laughed and cried its way through the Hollywood classics and the best of British and World Cinema. During this time, the building has been a major source of contact with the outside world and within the community. People’s perceptions have been changed, their lives enriched.

And then, in November 1996, the owners decided to close the doors for good and sell the site for redevelopment into yet another new office block.

The community was horrified – petitions were signed, campaigns were instigated and the Plaza Community Cinema Trust was established. A lease was agreed and finally in July 1997 with no financial capital to speak of, but with a wealth of volunteer support, the cinema was reopened (this is a story in itself!), to show Jurassic Park to packed houses.

And so it went on. By Christmas ‘97 all three screens were up and running showing a huge range of films. Then came a whole multitude of film-related activities: – the Arts Screen; the (now over 300-strong) Kids Club; the afternoon social club; several festivals and lots of events: – an Advocacy film week; regular short film nights; a talk by a Holocaust survivor before a showing of Schindler’s List; presentations by directors such as Stephen Frears, Michael Winterbottom and Julian Temple. And the ideas just keep on coming! In January 2000, having raised Â£325,000 in just four months, the Trust bought the building. And with virtually all the work done by unpaid volunteers and for 364 days per year. Even though we now have a core of paid staff, the Plaza still could not operate without volunteers.

other than on the theater website, maybe you can find a photo & link it?

A set of vintage photographs of the Plaza Cinema, Waterloo:
View link

Early 2019 will see the start of the installation of a WurliTzer theatre organ installed back in the Plaza.The organ has previously been in the Ritz/ABC Ipswich and the Hollywood Plaza Scarborough.

Great! I understand that the former ABC Ipswich Wurlitzer was hardly ever played whilst in Scarborough. It is wonderful having these fine instruments housed in traditional cinemas and in regular use.

Below is a link to a video of the very same organ being played by Gerald Shaw whilst still in situ in the Ipswich ABC:–

Terry, Yes that video of Gerald Shaw was uploaded by me.We are going to St Leonards in January to get it out of long term storage (ten years)The console and surround will be restored first externally so it can sit in front of the stage and garner interest(and money).The chambers have been cleared of defunct equipment and now need to be plastered ready for the organ. Adrian