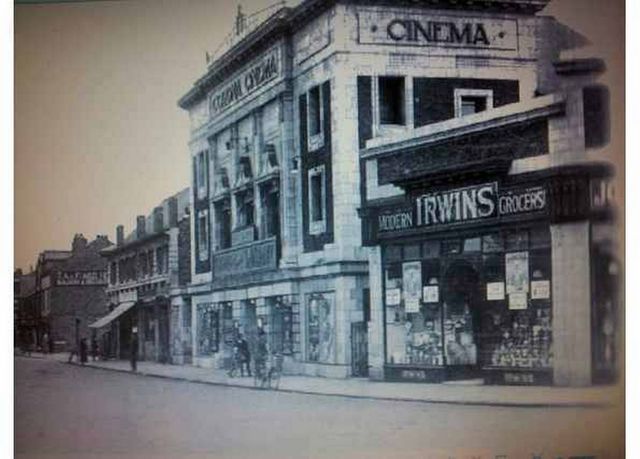 Located in the north Liverpool district of Crosby. The Corona Cinema was opened in 1920 following several years in development halted by the outbreak of World War I. The site had long been known as an entertainment venue and had previously been known as Marsh Fields hosting Lord Sanger’s Travelling Circus and troupes of pierrots and travelling fairs.

Designed by Liverpool based architectural firm Fraser & Ainley, the Corona Cinema was opened on 21st May 1920 and was originally built for a small group company but handed over to the larger Gaumont British circuit in 1928.

The cinema was a large white building and had the name The Corona Cinema in gold letters at the top. From when it opened the cinema had an orchestra which would accompany the silent films, as cinemas at that time didn’t have sound systems or speakers like they do now and narrative of the film would be shown via text on the screen.

Page boys would be employed by The Corona and carry sandwich boards around the area promoting the latest films and coming attractions.

The Corona Cinema was the first local cinema to be equipped for sound on March 31st 1930 showing the “The Great Gabbo” featuring Eric von Stroheim and Betty Compson. It was known locally as the “Talkie House with Orchestra” and had been equipped with a British Acoustic(BA) sound system. The Corona Cinema had strong competition from other local cinemas.

The Corona Cinema closed as a cinema on 1st December 1956 with William Holden in “The Proud and the Profane”. It then became a dance hall and was demolished in 1957. Now shops stand in its place.