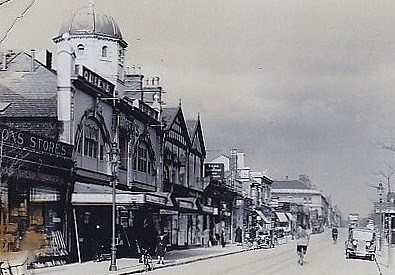 Located in the district of Waterloo, to the north of Liverpool. The Queen’s Picture House was opened on 17th March 1913. Designed by architect Joseph Pearce, it had two arched windows on its facade, and was topped by a centrally placed dome. Inside the auditorium seating was on a stadium plan, with a stepped raised section at the rear (rather than an overhanging balcony).

Never operated by a major cinema chain, the Queen’s Picture House was closed on 22nd August 1959 with Bernard Bresslaw in “I Only Arsked” and Randolph Scott in “Buchanan Rides Alone”.

It was converted into a furniture store, and over the years, the original frontage was removed. Last operated by Waterloo Furnishing Stores Ltd. it had closed by September 2009, and the building was ‘For Sale’. It was purchased by the J.D. Wetherspoon chain of pubs in 2011, and opened on the 10th April 2012 as the ‘Queen’s Picture House’.