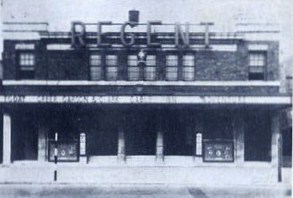 Crosby is a suburb of Liverpool, approximately six miles north of the city. In the 1920’s the district was a desirable residential area to live in.

The Regent Picture House opened in 1920, and offered patrons a cafe. Competition was from the Corona Cinema, a Gaumont British operated cinema. It was taken over by Associated British Cinema(ABC) on 25th November 1935. Up to 1939 the cinema was enjoying good business, until the nearby Plaza Cinema in Waterloo opened.

Entrance to the building, had the paybox situated facing the street, between the two sets of doors. At the side of the cinema there was a very long passageway for patrons to queue out of the rain.

The Regent Picture House was a pre-sound cinema, and had a restricted proscenium arch, placed between exit doors either side of the screen. Curtains were raised and lowered.

In the 1960’s, the Regent Cinema was running on a shoe string budget, with matinees on Wednesday afternoon, and Saturday continuous from early afternoon.

Closure came swiftly in 1967, with no forewarning in the local paper. The cinema then operated bingo for many years, until in the 1990’s the nearby St. Mary’s School bought the building.