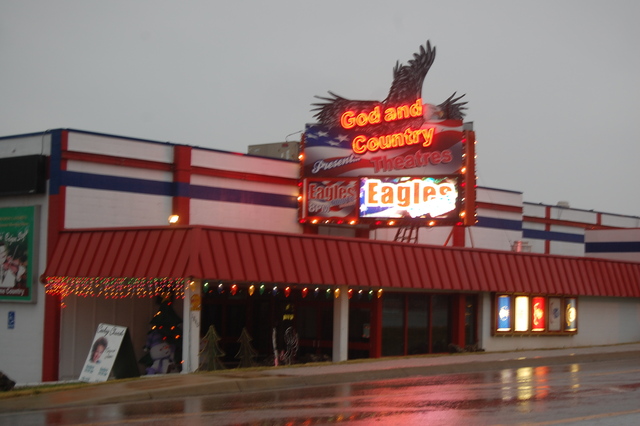 This theatre opened in 1986 as the Tablerock Cinemas seating 832. The exterior is a white stucco with a red shingled wood overhang along the front of the building. It has a small V marquee in the middle of the front above the overhand. Nova Cinemas took over operations in 1996 with a slight clean up and some fresh paint. On January 13, 2004 one of the auditoriums was made into a live entertainment venue.

The admission price for the remaining auditoriums was set at $5.00 and included a soft drink and popcorn.

With the theatre being located right on the main street in Branson and around all the hotels it does a brisk business. I have been to Branson several times and each week end that I have been there the lines were down the block waiting to get in. Most visitors to Branson are looking for bargains so the Branson Movies are right up their alley. Movies have now ceased, and it operates a a live performance venue named God and Country Theatres.

This theatre no longer shows films. It’s just live entertainment, like Branson mostly is. I believe the final film they showed was “The Hitchhiker’s Guide To The Galaxy”. Notable: on May 16th, 2002, Star Wars:Episode II was screened on all four screens.

This theatre originally opened as a twin back in maybe 1975. I remember watching a kids movie then going over to Jaws while waiting for my dad’s shift to end (he was a projectionist there before we moved).

The name of this theatre should be changed to God & Country Theatres. It is a live venue only. website