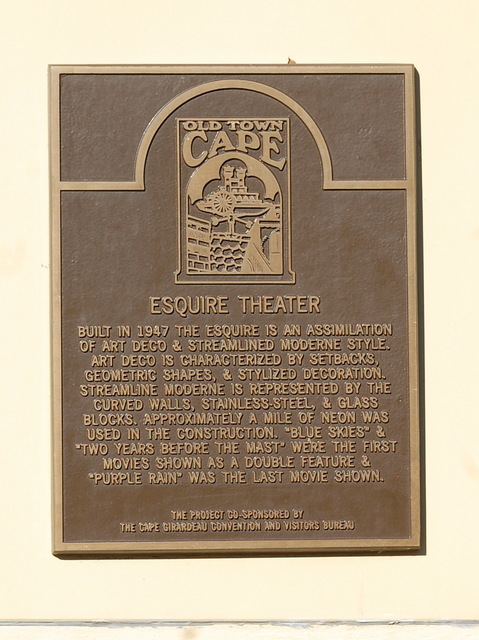 The Esquire Theater was an Art Deco/Streamline Moderne style house that was built in 1947 seating 1,106. It opened with “"Blue Skies” and “Two Years Before the Mast”. A two and a half story front facade with shadow boxes down the front till it met the marquee. The marquee stretched the entire front of the building from side to side. A free standing box office with entrance doors to each side. The lower part of the facade was done in a cream color tile with decorative art work around the two glass enclosed 40 x 60 psoter cases on each side of the entrance doors.

The lobby was a good sized lobby with terazzo floors. The concession was located against the back of the auditorium wall and two staircases one on each side of the lobby led to the balcony and the booth.

The auditorium was much in the same Art Deco/Streamline Moderne style as the front facade. There were designs and patterns painted on the walls and black lights from the corners of the ceiling lighted them. The Esquire Theatre had a stage, but it was seldom used. This was a great old theater for a college town but when the multiplexes started popping up in the shopping centers on the outskirts of town the downtown started on a downward trend and along with it the Esquire Theater. It closed in 1985 with Prince in “Purple Rain”.

‘BATTLESTAR GALACTICA" played in June 0f 1979.No mention if SENNSROUND sound effects were in the theatre.

Ksteinhoff’s link was very helpful – Unfortunate that the marquee was hit by a truck.

Happy to hear the the ‘Esquire Theater’ is still in existence & spared from the ‘Wrecking Ball’ of progress.
I was a freshman at ‘Cape State’ in 1958 & in need of funds to complete the year. Jim Foster, Manager of the ‘Esquire’, hired me for position of ‘Marquee Technician’ (three guesses as to job description duties)& ‘Usher’. Had a great year working with co-workers & Mr. Foster, who happened to be a terrific guy.
Still recall some of the great movies at that time…‘The Pride and the Passion’, ‘Mr. Roberts’, Doris & Rock, Cary & Audrey thrillers, etc.
Interestingly, Mr. Foster telling me to assist the concession stand at intermission at one of the new movies…he stated that there was something called “subliminal messages” in this movie & that patrons would want a lot of popcorn, candy & soda. He was correct…sales
were off the chart that evening. Later, I heard that the Government ordered these messages to cease & desist.
Would be nice to hear from my co-workers from that time.
Joe
e-mail:

The Esquire is in better shape than the Broadway, but it’s still pretty ragged.

Both are in better shape than the Rialto, which suffered a roof collapse in the summer of 2010

and was gone by the end of the year.

Good news: the Esquire Theater in Cape Girardeau has been sold to someone who is going to renovate it and turn it into an indie house.

Unfortunately the “business man” who was to renovate the Esquire skipped town and the building is in shambles. http://www.semissourian.com/story/1892962.html

Here is a recent shot of minor repairs being made to the Esquire.

What do you think the best use for the theater would be if someone did decide to renovate?

If I had the money to renovate it, I would.
I think it would be a fantastic location to create a proscenium stage for plays, musicals, and opera — and with a screen could show indie films and second run flicks, in addition to being a great place for concerts in an intimate setting. I know we have Bedell now, but it would still be great for those uses, and could produce shows with smaller draws and more controversial subject matter. If only I had the means, I would certainly have the motivation. Ever since I moved here in 2011, I’ve wondered how it could sit vacant for so long, being on Broadway in the center of town, right on the corner of campus.