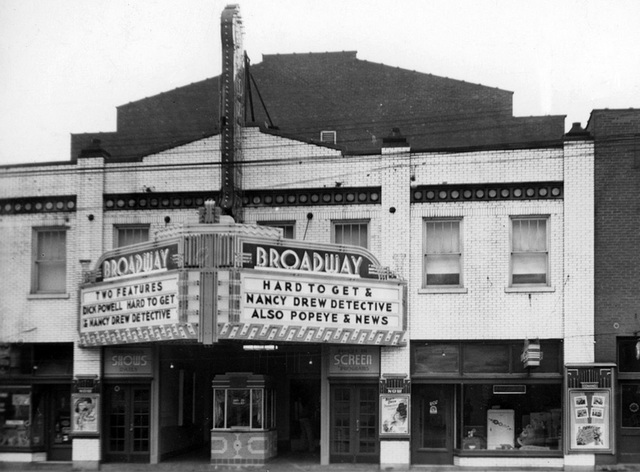 One of four theatres that lined Broadway at one time in downtown Cape Girardeau. The Broadway Theatre was one of the more elegant that lined Broadway Avenue with the double towers on each side of the front with a large vertical sign. Elaborate plasterwork adorned the lobby and the auditorium. Detail work around the proscenium with dark red velvet drapes over the stage.

Another of the small town movie palaces of a by-gone era. The Broadway Theatre opened in 1921 and closed in 1960. It was taken over by Kerasotes Theatre in 1970 and after a remodel and refurbishment it reopened in October 1970. It was still operating in 1984, and after closing became a church.

Its current facade is certainly not much to look at. It seems to be in use as storage presently. Photos at http://www.flickr.com/photos/tags/ctid8225/

There’s a HUGE basement underneath the building that stretches from under the sidewalk all the way back to the rear. There are numerous dressing and storage rooms for when the threatre had live shows in the 1920s and 30s. There is also a small set of rooms above the enterance that were either offices or an apartment.

The balcony was abandoned in the 1970s and the chairs were removed shortly after from the upper level.

This theatre was opperating as a cinema until the spring of 1984. In 1986 it was occupied by a church. After about two years, the church either disolved, or moved to a new location. The church took generally good care of the buildig. While they occupied it, the orchestra pit was covered over with stairs leading up to the stage, and a plaster gargoile was removed from the crown of the proscenium arch. The interior was also painted a gleaming “ White”. The building remained vacant until about 1990, when it reopened as a dollar cinema. It closed after just six months and has sat deteriorating ever since; along with just about every other building on the street.

Here is an October 1960 article about the closing of the theater:
http://tinyurl.com/ycv6s7l

This opened on December 24th, 1921. Six-page ad section in the paper can be seen at View link

“BEDNOBS AND BROOMSTICKS” had a successful run in a theatre that played a lot of DISNEY Films.

I managed to get inside the Broadway 12/16/2011. I was blown away that it’s in relatively good shape. A guy is going to open a small shop in the lobby, but the owner implied that there may be something in the works for when the 18-month lease runs out.

Here are photos of the public areas. I’m posting photos of the backstage and basement areas the next day. http://www.capecentralhigh.com/cape-photos/broadway/broadway-theater-wow/

The Esquire, across the street, is being renovated, too. I’d love to see those two properties restored. It would change the complexion of that whole area. http://www.capecentralhigh.com/cape-photos/broadway/esquire-gets-new-life/

Here is a a quick link to the photo page ksteinhoff posted. They show that the Vitrolite front has been removed, exposing the original brick facade of 1921. The Vitrolite front was probably of 1930s vintage, though perhaps 1940s, indicating a remodeling sometime during one of those decades.

One of ksteinhoff’s photos show the balcony soffit, and shows a column supporting the balcony. That’s rather surprising in a theater built in 1921, as by then most architects and engineers knew how to cantilever a balcony.

The Broadway Theatre was probably the project in this item from the May 21, 1921, issue of The American Contractor:

“1 sty. & bas. balcony. 60 ft. front, 60x163. Cape Girardeau, Mo. Engr. C. A. Koerner Engr. Co.. Odd Fellows bldg.. St. Louis. Owner Company Composed of C. O. Hobbs, member, Cape Girardeau. Brk. frpf., brk. re. cone. Owner builds. C. W. Boutin will supt. const, on site. Owner taking bids on sep. contracts.”As the item names only an engineer, and not an architect, I would imagine that the interiors were designed by the decorators, which the opening day ad section of the loacl newspaper Mike Rivest linked to earlier says was Blore Brothers of Cape Girardeau. The Engineer, C. A. Koerner, apparently moved his company to Louisville, as the only other reference to him I can find on the Internet places the company there in 1924, when they acted as general contractors on the Kosair Temple.

The Broadway was a Fox Midwest house in 1938, when it was (at least partly) reseated. A photo, which doesn’t show much more than some seats and the aisle carpet (top of this page) was published in >Boxoffice of January 7, 1939. As the caption says there were 875 new American Bodiform chairs, if the capacity we have listed is correct then only the main floor must have been reseated at that time.