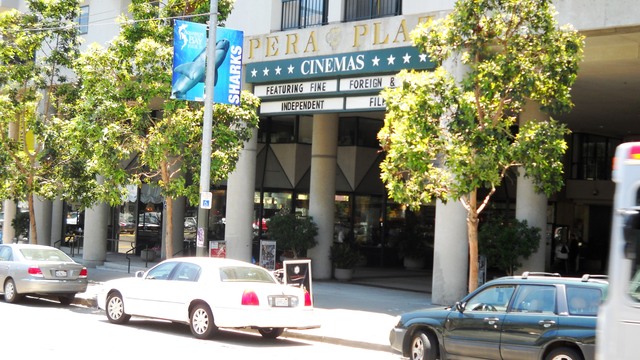 An unsung art-house fourplex, opened November 16, 1984, developed by Allen Michaan as part of a shopping and office plaza near the Civic Center. Now operated by Landmark Theatres.

I caught at least three films here in my visits to the city: Ted Kotcheff’s Joshua Then and Now in July, 1986; a revival of the 1937 Polish/Yiddish film by Michal Waszynski The Dybbuk on November 11, 1989, and the Hungarian Whooping Cough, directed by PÃ©ter GÃ¡rdos, on August 2, 1990. I remember the theatre as being functional, the screening rooms small, the programming incomparable. Every decent-sized city in America should have an Opera Plaza Cinema. So if the description calls it “an unsung art-house,” I am singing it.

The Landmark Opera Plaza has a marquee out front on Van Ness but they don’t change the wording ever. Says the same thing every day. You don’t know what’s playing. Probably don’t want to pay the help with a ladder to post the new films playing in the tiny cinemas. Just like Century, Brendan and Regal many theatres don’t bother changing the marquee these days. Maybe If they did some advertising out front people will stop in.

I love this theater. It is a definite throwback to the 80’s with the neons and the reflective ceiling. The popcorn is always fresh and the bathrooms always clean. The movies they show are mostly foreign and independent films, as they are part of the Landmark chain. They usually get movies that have been playing for a little while at the Embarcadero Center Cinema or the Clay, which means that they will undoubtedly be getting the films that are doing better. While the screens are not very large, the projection and sound is always top notch and the small auditoriums make it seem like an exclusive movie event put on just for you. A very nice movie theater experience. I hope this theater stays open for many years to come!

Caught one of the final theatrical showings of All Is Lost here on Thanksgiving evening – tiny room, but that didn’t matter once the show began. And I was thrown for a minute when I realized we were watching an actual 35mm print – scratches, dust and all – and not a digital presentation. That is old school!

If they’re still running 35mm, then I assume the Opera Plaza’s days are numbered.

A change of use application has been filed with the SF Planning Dept to convert the Opera Plaza into retail space:

That grand opening add is such a lie. There is nothing magnificent about this theatre. While it has its charm, it may be one of the worst places to see a movie in northern California. That being said, I love it for what it is.