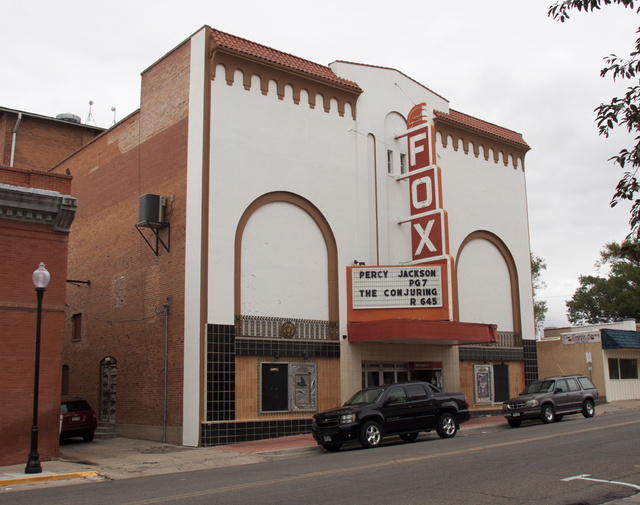 The historic Rourke Opera House was originally built in 1912 as a playhouse, later renamed Rourke Theatre it had 768 seats. It was purchased in 1939 by the Fox Intermountain Theaters Inc. chain and converted to a movie theater renamed Fox Theater with 800 seats.

The movie house remained open until the mid-1980’s, when it closed for renovations which included the sad, but inevitable, twinning of the theater with seating for 159 and 96.

Following the conversion, the theater remained open until April 2001, when owner and operator Terry Smith decided to sell the theater.

He found a willing buyer in Winston Evans, who has been in the exhibition industry for 45 years, and once owned several theaters around southern California. Evans took over the day-to-day operations of the historic movie theater a month later and the theater has remained open ever since.

This theatre is currently closed as of the week November 5, 2005. The marquee says closed for restoration. Interior work in progress was visible through the windows. It appeared significant work was still needed in the lobby area.

I visited the Fox back in January to see “Bride Wars” when visiting a friend who lives in the area. The theater is very clean, well kept and well managed. It had been closed for many years but was purchased by a Joel Johnson and family about a year and a half ago and renovated. It is still a twin and has a very large lobby. The theaters are made up by splitting the main floor auditorium in two. They feature new seats, carpeting and restored wood floors and other nice features. Not many original details remain in the auditoriums but the lobby is quite original and has a display of artifacts from the theater and historic photos. I visited with Mr. Johnson for quite a while after the show and he is a very kind man with a passion for the theater. He even took me upstairs and allowed me to see the original balcony. This area is quite a time capsule and murals adorn the walls depicting native American/cowboy and western scenes. There are also many vintage seats, the old (but empty) projection booth and a beautiful proscenium arch and antique asbestos fire curtain. When the theater was twinned in the 1970’s, the ceiling in the bottom auditoriums was lowered and this area was sealed off. Mr. Johnson stated that he hopes one day to restore this area in a historically correct manner and open it as a 3rd screen.
This is an amazing theater. Go and see a movie and support the owner’s hard labor and efforts if you are ever in the area!

Fox Intermountain Theatres spent $35,000 to remodel the Fox according to a note in the Nov. 8, 1952 Motion Picture Herald.