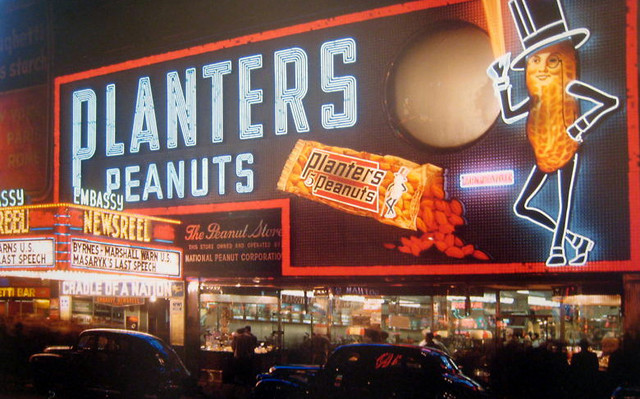 The Embassy Theatre was opened by Loew’s Inc. on August 26, 1925 with Eric Von Stroheim’s “The Merry Widow”. Designed by famed theatre architect Thomas Lamb in a French Renaissance style, seating was provided for 556, all on a single floor. Decorative details were the work of the Rambusch Studio, and murals on the walls were by Arthur Crisp. The entrance on the east side of Broadway, Times Square, is a long narrow corridor, lined with polished wood panels. The concept of the Embassy Theatre was to provide movie entertainment to a refined audience, and initially when first opened almost all the staff were female. The Embassy Theatre was equipped with a Moller 3 manual, 15 ranks theatre organ, which remained in the theatre until around 1927.

In 1929 the Embassy Theatre was taken over by Guild Enterprises, and on November 1, 1929, it became the first movie theatre in the United States to operate as an all newsreel theatre, renamed Embassy Newsreel Theatre. In 1949 it became a first run movie theatre again, operated by Liggett-Florin Booking Service. Later renamed New Embassy 46th Street Theatre on August 13, 1968 the World Premiere of “Targets” starring Boris Karloff was held at the New Embassy 46th Street Theatre. It was finally renamed Embassy 1 Theatre (the nearby former Mayfair/DeMille Theatre had been renamed Embassy 2, 3, 4 Theatre).

In 1987, the interior of the Embassy 1 Theatre was designated by the New York City Landmarks Preservation Commission.

The Embassy 1 Theatre was closed as a cinema on December 11, 1997. Renovations were carried out and it reopened in 1998 as the Times Square Visitors Center. Sadly this closed in June 2014. In November 2019 it was reopened as a sports store dedicated to soccer(football).

I think you mean “Daddy’s Gone A-Hunting” and that was summer of 1969. The summer of love.

I thought that was still the 60s as late as it was which you can tell buy the shortness of the skirts.

Numerous views of midtown theatres, starting with the Embassy Newsreel, can be seen in this B&W film footage from December, 1929

Saul Smaizys 1977 photo via Flickr. Image will enlarge in link.

When I went to the visitors center I was impressed by all the showcases which had housed the movie posters in the long corridor and how low the ceiling of the auditorium was. The original ceiling was there and the sloping floor also intact.

I don’t know whether to laugh or cry.

Only went here twice that I can remember- once in 92 for Noises Off and once right before it closed to see The Full Monty. I remembered thinking it was too bad I hadn’t gone more often because it was a cute little theater.