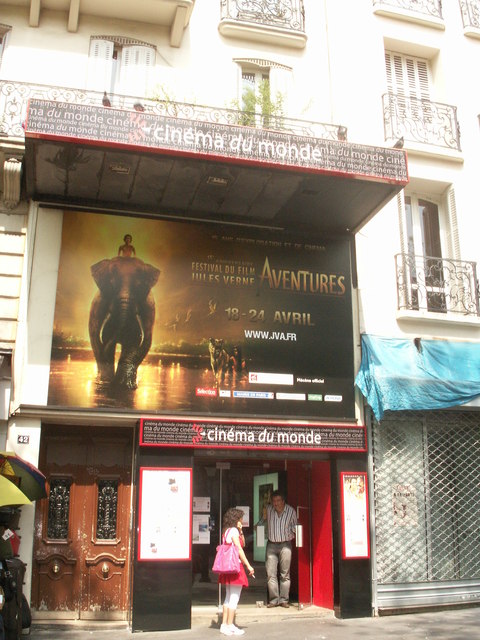 Located diagonally across the boulevard from the Grand Rex cinema. At the beginning of the 20th century the Boulvardia was a ‘concert café’ of the Grand Boulevard and like many theatres and show places of the district it converted to cinema use, opening as the Cinema Palace in February 1907. All seating was on a single level. It was equipped to show talkies around the early-1930’s.

By 1946, it had been re-named Boulvardia and in the 1950’s it became the Amiral. In the 1960’s the Amiral Boulvardia had a policy of first run B movies like westerns and spy movies. It was part of a chain with two other cinemas, the Saint Antoine and the Cigale.

The titles of the movies that were shown here made in Italy were partly copying American hits, for instance, “The Battle of Navaronne” with Maria Monroe. Also some popular westerns called “Trinita” had amazing success (6,000 tickets sold each week for a 200 seat auditorium).

Frescoes of the monuments of Paris (like the Eiffel Tower and the Moulin Rouge) on the walls of the theatre with red neon give it an original atmosphere.

Unfortunately, after a renovation in the 1970’s style with carpeted walls and modern seats, from 1975 it was re-named Brooklyn, and became an adult movie theatre, screen movies such as “The Story of O”. The Brooklyn was closed as a pornographic cinema on October 19, 1993.

Shouldn’t someone add the CinÃ©mathÃ¨que FranÃ§aise at the Palais de Chaillot to Cinema Treasures? I have a photo I took in 1970 of Henri Langlois walking up the steps and I would like to post it.

This theatre is now runned by independant.
the new cinematheque is now located in ex american center designed by franck gerrit and renovated with 4 screens and exhibition floor
it opened end of 2005

After the CinemathÃ¨que left the premises, it was called CinÃ©ma du Monde but closed eventually in 2007, apparently for good.

The Comedy Club is a comedy theater, unfortunately not a movie theater anymore…