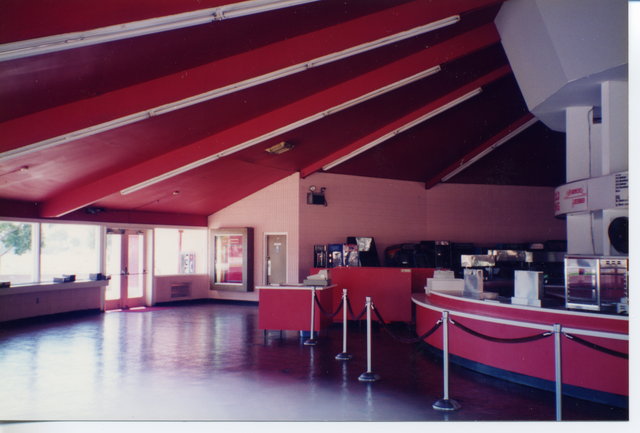 When the Stadium Drive-In 1-2-3-4, Orange County’s last-built drive-in, opened on May 27, 1970 it was billed as “The only four-screen drive-in in the entire West”. The circular snack bar, with a centralized projection booth on top, projected to all four screens.

During the 1980’s Syufy Enterprises (now Century Theatres) would add four more screens to the venue changing its already 2,600-car capacity to an indeterminate number.

Its closing left Orange County which once had drive-ins at 11 locations with only one ozoner, the Highway 39 Drive-In, which would later close in March of 1997.

Century Theatres was quick to rebuild, because in November of 1997 they opened a 25-screen indoor stadium on the site.

I started working at the Stadium drive-in 4 in 1975 picking trash from the lots. In 1980 I was running the projection booth after they got rid of the projectionist’s union. It was a glorious time for an 18 year old. Best memories of my life. It went from a 4 screen to a 5 screen to a 6 screen during my tenure. Met my wife of 30 years there. Thanks for the link!

I remember my friends and I attending the last night. It was a double feature of the Shining and the Exorcist. Before the second feature they were giving away clear trashbags of popcorn just to get rid of the stuff!! Irritating yet spooky was the Exorcist film kept breaking…queue scary music!!

For anyone living in the Orange area in the 70s/80s, this was a great place to go on a Friday or Saturday night, particularly in Summer. Wide selection of movies and awesome SoCal weather in the evenings. Everyone from families to teenagers on dates or with friends were there. OC was paradise back then. Great times!

I know Syufy built most the drive-ins the same, but the building here looks I-DENT-I-CAL to the Sacramento 6. The Capitol 6 in San Jose doesn’t look as big as either Sac or Stadium.

@ Scott. Just like the las Vegas drive in. It was a cookie cutter twin of the Stadium Drive-in snackbar/projection booth. Felt like I was in Orange Ca.

You must mean the Desert Drive In, in Las Vegas. LVDI is way different. Some of the drive-ins they built had way smaller domes than others. The domes in Glendale and Scottsdale were much smaller, and the one in San Jose, though similar doesn’t seem like it was built with as many windows as Stadium appeared to have.

@ Scott, you are correct. I remember the projection booth was a bit different. Yeah, it was the desert drive in.

Opened on screen 1 with “Butch Cassidy and the Sundance Kid” and “The prime of Miss Jean Brodie” and screen 2 with “The Love Bug” and “Darby O'Gill and the little people” and screen 3 with “Easy rider” and Last Summer" and screen 4 with “Mash” and “I love you, Alice B. Toklas”.

Saw Twister here with the wife and son. It was turned into a walk in complex after that