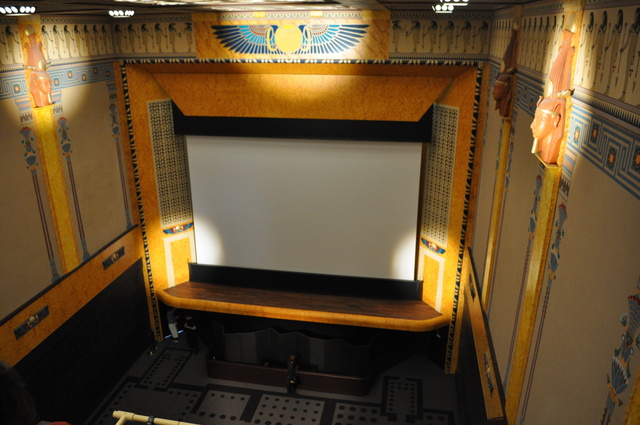 Built in 1921, and opening as an independent cinema on 6th October 1921, it was later taken over the Pathe chain. The Louxor - Palais du Cinema is an Egyptian-style movie theatre, designed by architect Henri Zipcy. There was an orchestra pit and a pipe organ and the seats had Egyptian style motifs. It is the only Egyptian style theatre ever built in Paris.

Seating was provided for 1,300 in orchestra and two balcony levels. The projection booth was located under the second balcony. The building is at the corner of two main boulevards and adjacent to the Barbes-Rochechouart Metro station. Egyptian art motifs are on the upper part of the facade.

Through the years the Egyptian design and marquetry friezes by interior designer M. Tiberi had vanished from inside the auditorium, and in the 1930’s it was given an Art Deco style. In later years a CinemaScope screen hid the stage and the proscenium.

By the 1970’s the district was changing. Still owned by the Pathe chain, the Louxor Pathe turned to a new program policy with Arab and Egyptian movies. With 10,000 patrons each week, the profit was enough for Pathe to keep this theatre different from the other first run theatres of the chain.

The theatre became notorious for drug dealers and prostitution, and operated from midday to midnight. On 30th November 1983, Pathe closed the Louxor with the Arab film “Qaid”.

The facade was given a Listed building status and the theatre was purchased by Tati, a clothing chain store, but they never opened the building. In November 1986 it was converted into a Carribean style nightcub named ‘la Derobade’. It was transformed into a a gay disco named ‘Megatown’, which opened on 20th June 1987, and operated for a year. The Louxor Pathe was then closed up and unused for over 25 years, becoming a haven for the homeless and drug addicts.

In 2003, the city of Paris bought the land and the building and proposed a huge renovation to return the theatre to its former appearance. In early-2008 the building was still unused, but renovation/restoration work began in 2010. The building was gutted internally, even removing and replacing the two balconies. Plans by architect Phillipe Pumain included a replication of the original Egyptian style decoration in the main auditorium, and two additional auditoriums in the basement.

The Louxor re-opened to an invited audience on the morning of 17th April 2013, which was inaugurated by the Mayor of Paris, and a screening of the classic 1949 Jacques Tati film “Jour de Fete” in the main 342-seat auditorium. The seating is still arranged in orchestra and two balconies, but the majority of the space which was at the rear of the second balcony is now a bar. This auditorium has a ‘square’ screen set within the frame of the proscenium, which will be used for silent and older films, and a screen with variable masking which emerges from the top of the proscenium pelmet, and rolls down in front the ‘square’ screen, upon which modern ‘widescreen’ films will be shown. Projection is provided via a 35mm and digital projection system. The two basement cinemas, both with digital projection are attractively decorated, one in a Deco style with bands of concealed lighting across the side-walls and ceiling in a 74-seat auditorium, and a touch of Egyptian style with round pillars along the side walls in the 140-seat auditorium.

The rehabilitation of the Louxor will start in 2009. the cinema should re-open in 2013 ! To know everything about it, visit our site :
http://www.lesamisdulouxor.fr
Our association “les Amis du Louxor” supports the project ; we try to keep in touch with the architect, the decision-makers of the city of Paris. We try to collect and give information.
But where did you find this story of “a murder in the stalls,”?
to know everything about the real history of the Louxor, visit our site !

This is excellent news, I saw the Luxour in a very derelict state on the last CTA visit to Paris. Just shows what can be done where there is the will. Just a shame the screens are bare, A festoon in the original proscenium would have topped the restoration off nicely, but that’s just me.

This renovation is nothing but façadism ! The inside of the building was demolished, not renovated ! The original auditorium and its decorations have been destroyed and are buried behind the new walls. Mosaics, murals and other original architectural details are forever lost, encased in cement.

Also before the demolition, the auditorium had 1,200 seats… Now the new auditorium has only 340 ! The architectural space has been significantly altered, chopping up the auditorium to make space for an art gallery, café etc.

you can read more here: http://actionbarbes.blogspirit.com/archive/2010/07/22/le-louxor-dans-le-canard-enchaine.html