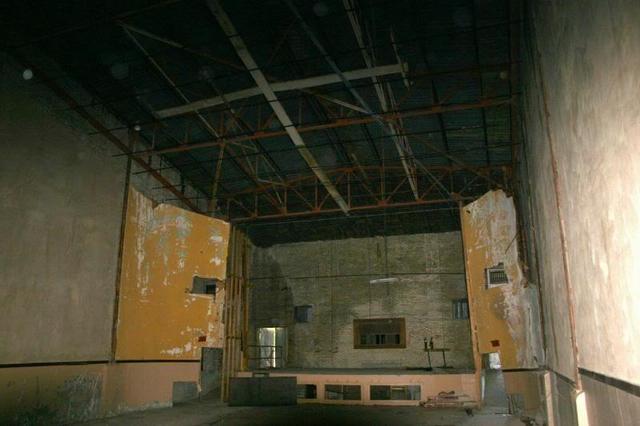 This theater sits on Confederate Square. A local told me it was named for the owner, a Mr. Lynn.

The facade is very interesting, almost a Bauhaus style. The Lynn Theatre opened in 1947. The vertical portion of the marquee is especially cool, with a pattern of stars and a pole on top with a light on it (which seems to be a popular feature for Texas theaters).

When in the planning stage, this house was to be called the Texan Theatre, and that was the name on the vertical sign in architect Jack Corgan’s rendering of the proposed house, displayed in the “Just Off the Boards” feature of Boxoffice Magazine, March 1, 1947. The theater was being built for Lynn Smith, local associate of H.J. Griffith’s Theatre Enterprises Inc., and he apparently got the house after himself instead of using the name Texan. Smith also operated the Crystal Theatre in Gonzales.

The Boxoffice item gives the seating capacity as 900, and I think that’s probably much closer to the mark than the 1,200 given in the article from the San Antonio Express-News. The satellite views (the best is at Historic Images- the views at Google and Bing are both too blurry) show that the building is not very large, so even the Boxoffice claim of 900 could have been a bit exaggerated, as is often the case.

Anyway, by calc’s count in the comment of last May 27, the current seating capacity would be 435, if you include the 12 wheelchair spaces.

Boxoffice of October 2, 1948, gave the opening date of the Lynn Theatre as September 29.

I’m sad to say it might not be in operation any more. This Easter weekend I passed through Gonzales and the TOOTH FAIRY is still in the poster boxes. Last time their web site was updated was Feb. 12, 2010 with THE TOOTH FAIRY listed for that date. Damn it, I hope they can get it going again.

Here is a fresh link to the March 1, 1947, Boxoffice item with architect Jack Corgan’s rendering of the proposed Texan Theatre in Gonzales, which was opened as the Lynn Theatre.

Great! Good news for the community.

The Lynn Theatre’s official web site link is dead. It appears that they are now using this Facebook page in lieu of an actual web site.

My fiance' and I visited the Lynn Theater on 01/17/15 and Mary, the owner gave us a nice impromptu tour. She stated that she and her husband also operate another theater with a 3rd on the way. Hopefully they will be open a good long time. They have 3K resolution projectors but she and her husband are enthusiasts so the 35mm projectors were still in the booth so she explained how it all works now and how it used to work. Very nice lady.