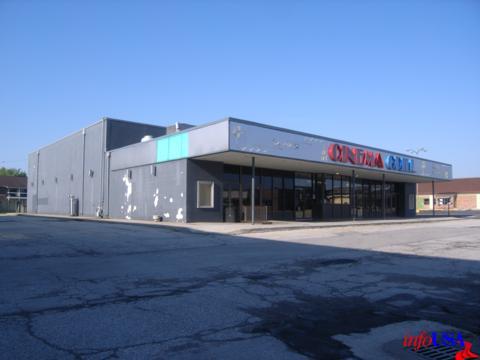 The Jerry Lewis Cinemas twin opened December 21, 1972 with James Garner in “They Only Kill Their Masters” & Goldie Hawn in Butterflies Are Free". It went under several different managements and became a restaurant/bar/cinema complex named the Greenbriar Cinema Grill, which closed on May 31, 2012.

This movie theatre is a great place to go for good time out. In one convenient location you get into a movie at a good price and are able to kick back and enjoy it in enjoyable surroundings. The seating is comfortable chairs at either a bar style counter top or around a bar style chair where you can sit your good food, beer, popcorn, etc. The environment is a very friendly non-smoking very clean place to enjoy a movie with a great staff waiting on you. They also host various broadcast sport games such as opening night football for the Colts, Pacers playoff games and the Old Oaken Bucket between Purdue and IU that are projected on the large cinema screens. This is one of my favorite places for an evening out.

Closed as of May 31, 2012 after almost thirteen years: View article

http://www.cinemagrillonline.net/ Discover Indiana’s unique dining and entertainment experience that is Cinema Grill. Our combination movie theater and restaurant provides a comfortable, roomy environment with an incredible menu of delicious, casual dining favorites. Whether you’re looking for the perfect date night or family fun, the Greenbriar Cinema Grill can deliver a memorable experience.

After almost 13 years, Cinema Grill has closed its doors. We enjoyed serving this community and appreciate the loyal patrons and friends we’ve obtained over these years. Thank you for supporting the independent theater owner. I ask the community to continue to choose locally owned independent theaters by supporting The Movie Buff Theater that is just down the road to our West on 86th. I’m partnering with their owner to continue to work and serve this community.

Only went once, but I really loved this theater. I saw Waiting with Ryan Reynolds and Anna Faris.

The Greenbriar Shopping Center (not Greenbrier) was announced as a project in 1963 to be theatre-less. The project’s official Phase I grand opening took place in December of 1969 with Rich’s Department Store as a main anchor. Its theatre-less status changed during Phase II of the complex when the fourth of five area Jerry Lewis Twin Cinema opened on December 21, 1972 with “They Only Kill Their Masters” and “Butterflies are Free.”

Unfortunately, by that time, the Jerry Lewis Cinema Circuit was going into free fall economic woes leading to the filing of bankruptcy of the parent company. With little support from the mother ship, all five of the local former Lewis theatres were picked up by United Cinema of Indiana Inc. on May 23, 1973 headed by veteran Loew’s Rochester Theatre manager Lester Pollock. United appears to have folded in May of 1976

Next, under Heaston Theatres' operation beginning in September of 1976, the Greenbriar was downgraded to a sub-run dollar discount venue. It then added VHS movie rentals in a club pricing policy in July of 1983. It was dropped at the end of a 20-year lease in 1992.

CTS Theatres took on the location on a new 20-year lease in April of 1992. In December of 1995, under independent operation, the theatre closed briefly for a refresh and a brief return to first-run status. It then passed to MCCI Theatres which closed it as a second-run house on October 5, 1999 when a new operator decided to refresh it once again.