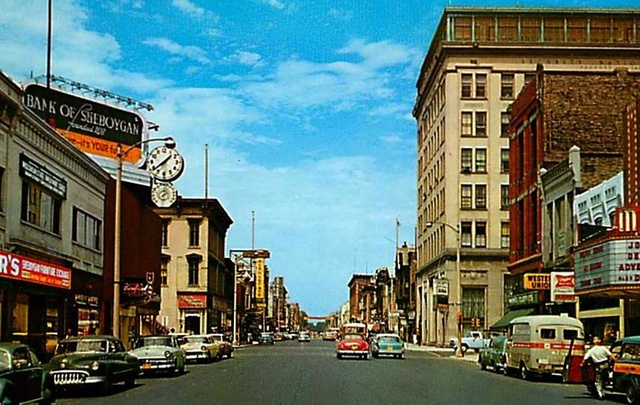 Another one of the long-gone theatres of downtown Sheboygan which also included the Sheboygan Theatre, the Rex Theatre, and the Wisconsin Theatre. The Majestic Theatre was opened August 5, 1911. By the early-1940’s it was operated by Warner Bros. Circuit Management Corp.

It was demolished in 1964 and a motel & convention center was built on the site.

My grandfather, Edward F. Kirtchen (1879-1945) owned and managed the Majestic Theater in Sheboygan. (I am not sure of the years.) According to his children, he was an astute businessman. He invited a famous actor, Brian Dunleavy (name?), to come to town — a big occasion! When Ed Kirtchen sold the Majestic Theatre, he moved the family to Milwaukee where he got a job managing another theater near the downtown area.
Josephe Marie Flynn

Here is an article from the Sheboygan Press dated 5/28/41:

Majestic, Now Redecorated And Remodeled Throughout, Most Modern House In City

What’s happened to the Majestic? This question is volleying around in Sheboygan from one theater-goer to anotherâ€"all of them amazed at the transition that has made the Majestic the most
modernistic and up to date movie palace in the city. Following the main question is a trail of minor queriesâ€"what is in that new type of front? What kind of an idea is that canopy? How has the lobby been changed? What are the new seats like?

Settle back in your chair and take an imaginary trip through the new theatre, starting from across the street to get a full view of the new bright spot on N. Eighth Street’s famed 500 block. Originally there were six windows across the front of the building. These have been covered and sealed tight to eliminate dirt and drafts. The entire front of the building has been covered with porcelain enamel in two tones of brown with a cream trim.

The new style canopy has two signs each 30 inches tall on either side of it that display the letters “MAJESTIC” in red neon. Sides of the canopy form a background of light for silhouetted letters. The
canopy holds 1,390 light bulbs. Two “attraction lines” are underneath it. At street level, the box office is built in on curved designs at the right of three sets of double doors. Complementing the box office at the left of the doors is a curved display case, to be illuminated by flourescent lighting. Poster cases are attractively installed on each side of the front.

At the far left is a door leading from the balcony. The first lobby, located inside the front door, has an attractive terrazzo floor. Birch doors match the outer doors, and the ceiling is illuminated by concealed flourescent lighting. Outer lobby walls are painted in rising blends of light blue. The office and entrance to the box office are located at the right of the outer lobby. In the inner lobby, solid birch doors open to the auditorium. They replace the glass doors formerly used there. A graceful stairway leads to the balcony at the right of the lobby.

The manager’s office, men’s and ladies' rooms are located on the second floor. The ladies' powder room has been greatly enlarged, and has an anteroom, or powder room, decorated in peach. A large mirror graces one wall, and beneath it is “powder puff shelf”. Old rose decorates the lavatory room, in which the latest miracles of plumbing have been installed.

The door leading to the men’s room has a picture of a man puffing on a pipe decorating it. Facilities in the men’s room have been greatly enlarged. A composition floor in both rooms is harder than
concrete, and is easily cleaned. New lighting fixtures have been put in the balcony, and the entire auditorium walls have been redecorated. The ceiling is light blue, the walls dark blue, and panels decorated in rising blends of light blue.

All seats have been replaced with the latest, typesâ€"the only theatre seats in Sheboygan boasting cushion backs. The seats are metal constructed with natural wood arms. The backs are cushioned
with rugged mohair of the same type used in the more expensive automobiles. The seats are constructed so that it’s virtually impossible to tear clothing on them. The resilient cushions are covered with dark green leather, and the aisle standards are trimmed with double lines of cream. Seating capacity of the Majestic has been reduced by 76 chairs in a move sacrificing quantity for comfort.

Manager of the Majestic Theatre since 1932, Leo Schuessler was born and raised in the city, and is a graduate of Central High school. Mr. Schuessler is married, the father of a 3-year-old daughter and makes his home at 1320 N. Tenth Street. His hobbies are hunting and fishingâ€"when he can find the time.

She was married to Mr. Van Der Vaart of Sheboygan in the early 1900s. In 1911 Mr. Van Der Vaart, E. R. Bowler, T. M. Bowler, and August Westermeyer formed the Majestic Theater Co. The theater recently was razed to make way for a million dollar motel and convention center.

Roman Bollenbeck was a manager for several years:

Atty. Roman W. Bollenbeck, 71, a longtime resident of Sheboygan, died Monday night at the Veterans Administration Hospital in Madison. He left university in 1922 and came to Sheboygan to assume
charge of the Majestic Theater, which was located in the 500 block of N. 8th St. The theater was razed in 1965 to permit construction of the south section of Grand Executive Inn. Mr. Bollenbeck was manager of the Majestic up to the time that Warner Bros. leased the theater. He then assumed charge of both the Majestic and Sheboygan Theaters.

This opened on August 5th, 1911. Grand opening ad in the photo section.