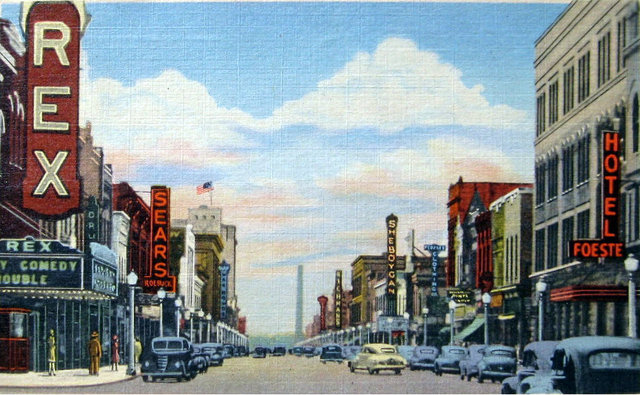 A mid-sized theater in the shopping district, the Rex Theater was opened September 29, 1923 to the plans of architect W.C. Weeks. In late-1929 it was briefly renamed Fox Theater. By 1941 it was operated by Warner Bros. Circuit Management Corp. Long since closed, it is now used for retail and apartments.

From the early 1950s a postcard view of the Rex Theater along with the Sheboygan Theater which was about two blocks away.

My late Dad, Ralph A. Schallow was the manager of the Rex in the ‘50s until it closed. He then went to the Sheboygan Theater as manager, and later the Marc Cinemas until he retired.

The “New” Rex opened in 1923 and was architected by W.C.Weeks and operated by E.J. Hoefer.

celebs, there is an error in your URL

Can anyone provide information about Sheboygan’s Unique Theater which stood at 608-612 N8th Street in 1905-1912 and, perhaps, before or after? It was the site of Groucho Marx’s third set of public performances as a member of the Eugene Leroy Trio in late-July and early-August of 1905.

Reboot ad as the Fox Theatre Now on November 2, 1929 in photos. The move proved short-lived and not without incident. On the venue’s tenth anniversary on September 29, 1933, it went back to its original Rex Theatre moniker and that ad was posted by another user in photos.

This 2015 article from the Sheboygan Press has a nice photo of the Rex.