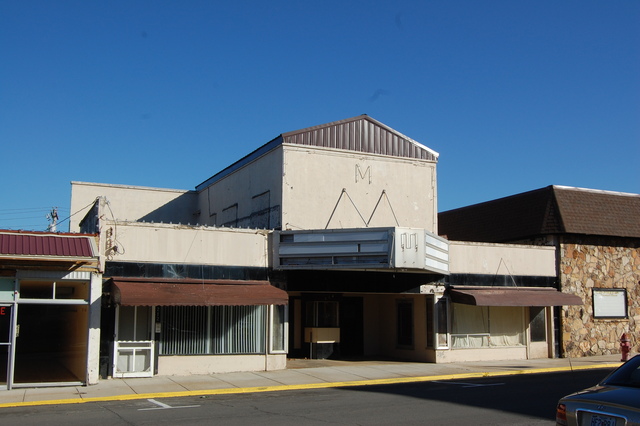 The Lyric Theatre was opened July 24, 1920. It was renamed Melba Theatre on November 19, 1931. It was rebuilt and reopened February 20, 1938 with Wallace Beery in “The Bad Man of Brimstone”. It was renamed New Melba Theatre (later becoming the Melba Theatre). This small and modestly styled modern style theatre became vacant in the 1980’s. The theatre has a very plain marquee with unusual free-standing neon above. Unfortunately, most of it is broken, and it’s hard to tell what it said. There is a neon ’M' on the facade above the marquee.

Renovation began in early-2017 and it reopened December 17, 2017 as a performing arts center.

Looks like my comment didn’t make it in. Thanks to Charles Van Bibber for the ID on this one.

From 2010 a photo Here and Here of the Main Theater in Houston Missouri.

Could this be the Melba theatre?

This theatre goes back to prior to 1925 when it was known as the Lyric Theatre. The theatre was wired for sound in 1931. It was renamed the Melba in 1932 when it seated 220. In 1940 a new theatre was built on the site and was opened as the New Melba Theatre seating 375. The theatre was reseated in 1947 to 325 and then being known as just the Melba Theatre, the New was dropped. The Melba was still listed as open in the early-1960’s.

The claim that this house was rebuilt from the Lyric/first Melba Theatre is mistaken. The New Melba was a new theater. A week before the New Melba opened, the original Melba, located a block away, was closed. It was converted into a furniture store.