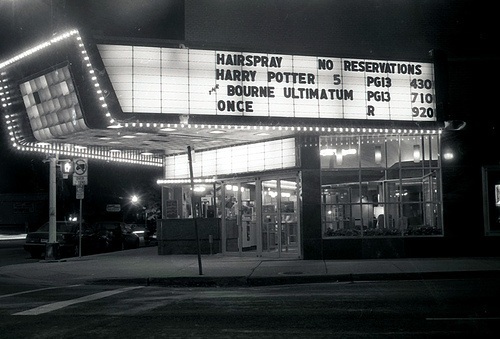 In the late-1940’s, Sidney and William Volk wanted to replace their aging Falls Theatre (see separate page on Cinema Treasures) which was located on Minnehaha Avenue. They contracted with the premier theatre architects of that period, Liebenberg and Kaplan, to build one of the finest theatres of that day - the Riverview Theater.

When it opened December 29, 1948, the Riverview Theatre was treated to a huge debut that was featured in national publications. The theatre’s first film was “June Bride” starring Bette Davis and Robert Montgomery.

The Riverview Theatre has survived for decades and looks much the same as it did in the 1950’s, with the same furnishings, including imported Italian marble tables and an auditorium that features a backlit proscenium. You can have your choice of over 700 seats on either the main floor or in the stadium seating section.

New high-backed seats were installed in the spring of 1999. In addition, the space between rows on the main floor was increased to provide more leg room. Stadium seating, although the new megaplexes are advertising it as a new concept, has been available at the Riverview Theatre since 1949.

The Riverview Theatre was modernized in 1956.

Today, a trip to the Riverview Theatre is like a trip back to the 1950’s. The house retains its 1950’s style and the walls of the lobby are lined with vintage photographs, many in full colour, taken of the theatre in 1956.

It remains an extremely popular theatre and it is often hard to find a seat on weekends.

As of 2005, the sound system at Riverview was upgraded to a new Dolby Digital system, featuring a set of sensurround subwoofers behind the screen.

I love this theater. It is a classic, and the theater appears practically unaltered from it’s original appearance. Even most of the original furniture has been preserved.

I grew up in the neighborhood, my Dad worked at Lee’s Supervalu across the street and watched the theater being built. I am a year older than the theater and I and my sister spent a lot of Saturday afternoons at the Riverview for the 7 color cartoons, the latest chapter of a serial and a feature with popcorn all for less than 25 cents. I visited the theatre several years ago and the wonderful staff let me in before showtime to tour the building, it was smaller than I rememberd from when I was 6 years old but exactly as I remember it. The owners are doing a great job of keeping the Riverview vibrant and looking great. I urge everyone visiting the twin cities to take some time to visit the Riverview, you won’t regret it.

I was the manager of The Riverview Theatre in 1973-1974. It is a beautiful theatre that was way ahead its time in its design. I worked for Sidney Volk and he was an interesting person to say the least. Another thing that The Riverview had that you don’t find in a theatre today was smoking loges. This was a seating area further towards the back of the theatre. The seats were vinyl covered in this area instead of the normal cloth coverings in the rest of the auditorium and had ash trays. We even had a cigarette vending machine in the lobby. I quit The Riverview in March of 1974 to moved back to Iowa and work for my parents theatre chain, Peterson Theatres. I recieved a very nice scrap book of pictures and different items of interest of The Riverview from one of the employees and will try to post them some day

A superb theater and a true ‘Cinema Treasure’. They frequently hold special screenings of old classic films. In October of 2009 every Thursday was Paul Newman night. They showed ‘The Hustler, 'Cool Hand Luke’, etc… Every December they devote a Sunday to showing the entire ‘Lord of the Rings’ trilogy, often including the extended editions, which are rarely seen on movie screens. Every June they host a screening of ‘Serenity’ to help benefit “Equality Now”, an organization whose stated purpose is to protect the human rights of women around the world. The Riverview uses the screen for presidential and vice presidential debates during election season. These air in High Definition widescreen and admission is free. They also show the presidential inauguration for free admission.

The main business is in showing ‘Second Run’ films (which should be added to the description of this theater’s function), but the true worth is in the older movies. Patrons can also get a hot cup of coffee or a hot cocoa to watch their movie with and it is stadium seating.

Ed Asner visited the Riverview Theater on September 29th, 2009 and gave a talk about his ‘UP’ character Carl Frederickson, and the lessons we can learn about aging and intergenerational relationships. The discussion was followed by a screening of the film.

I hope this theater stays around for a very long time and doesn’t change a thing.

One small note, they don’t take credit or debit cards. Not a big deal, as it adds to the atmosphere. There is an ATM on site.

The popcorn at the Riverview is fantastic. Some locals even stop by and purchase popcorn to go. The theater advertises its popcorn as “the best in town.” Yummy.

December 29th, 1948 grand opening ad with a picture of its futuristic interior in the photo section and below.