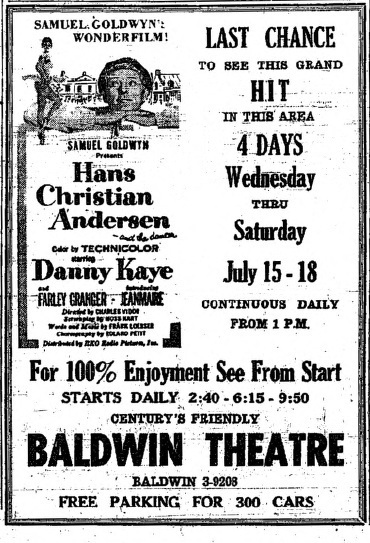 One of the older theatres in the Century Theaters chain. The Baldwin Theatre opened in March 1933 at what was then 71 Merrick Road. It had a nice balcony and remained single screen until it closed in the early-1980’s. The former theatre became an office building and by 2020 was in use as a medical center.

There was an earlier Baldwin Theatre on Grand Avenue. I established it on CT earlier this year based upon newspaper accounts. I have yet to establish a specific address. If I have an opportunity to access some really old phone books I may be able to do so. However, I’ve found that for listings prior to 1930 there are often only street names and no specific address. Life was simpler then.

If the earlier Baldwin Theatre was on Grand, then the most likely explanation for the current address of this theater not being the 71 Merrick Road that Chuck found would be a renumbering sometime after 1933. The newspaper article quoted earlier said that the area around Merrick and Grand was the original center of the village’s business district. If growth later led to several small settlements expanding into one another, then a renumbering of the lots would be fairly likely to have happened.

Hey, a lot of stranger things have happened. The Bellerose Theatre is now in Floral Park, after having been in Bellerose for over 70 years. Seems they changed the Post office for the Nassau County portion of the village to Floral Park. The Queens County portion is still Bellerose. Go figure.

Lol, Bellerose-Floral Park had always been “iffy,” like Alsace-Lorraine. I grew up in Valley Streamn and as I remember, Floral Park spilled over the Queens-Nassau line.

Saw “Victor/Victoria” here in the early 80s-way after its initial release and engagements. I believe that by this time The Baldwin had become a dollar theatre

Yes by cracky I remember seeing Way of All Flesh and Susan and God back in the fall of 1940 but haven’t been thar since.

I saw my first movie, snow white and the seven dwarves, at this theater in the 1950s. also later saw tom thumb, the good the bad and the ugly, and a double bill of the secret invasion and robin and the seven hoods. it was old when I was new.

A brief article in the October 1, 1932, issue of The Brooklyn Daily Eagle said that plans for the new theater to be built by the Schwartz Amusement Company on Merrick Road in the village of Baldwin were being drawn by architect R. Thomas Short.

The article noted that the theater’s site, which Schwartz had purchased six years earlier, was west of the Baldwin M.E. Church. The church now displays a sign reading First Church Baldwin United Methodist.

The modern address of the theater’s lot, displayed on the front of the Baldwin Office Plaza, is 865 Merrick Road.