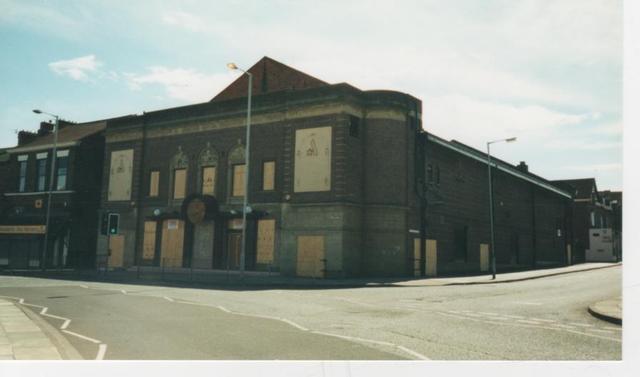 Located in the Egremont district of Wallasey, Cheshire. The Gaumont Palace was built in a quiet corner of town, away from the main centre. It replaced the earlier Lyceum Electric Palace Cinema (1910-1931) which had been destroyed by fire.

It was opened on 13th November 1933. Seating arrangements for the new Gaumont Palace was designed on a stadium plan, with a raised section at the rear instead of an overhanging circle. The auditorium walls were lined with silk tapestry and lighting was via a series of lamps hung from decorative poles attached at an angle to the walls and a series Art Deco style lay-lights in the ceiling.

It was taken over by Classic Cinemas from 12th December 1967 and re-named Classic Cinema. Bingo was tried briefly in 1969, but films returned and in September 1974 it was taken over by Unit Four Cinemas who divided the auditorium into four screens in 1975. In 1979 two additional screens were installed by dividing what had been the rear raised section into three screens. Taken over by Apollo Leisure it was re-named Apollo 6 Cinemas and these continued to operate until closure came in 2000. The building was left empty until 2005 when it was demolished and a block of flats built on the site.

It was a forgotten beautiful building even at the end but the developers got hold of it. It still had a lot of its original features on its exterior and apparently some remaining inside when it was converted to 6 screens, as a shell was put into the building. The decorative stone carved panels on the front of the building by artist Frank Barnes were saved intact from the demolishers.