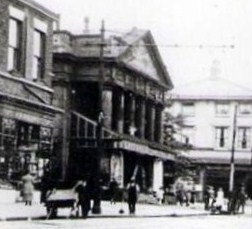 Located in the Egremont district of Wallasey, Cheshire, at the corner of King Street and Trafalgar Road. Originally built as a Presbyterian Church, this was an imposing building, which resembled a Roman Temple, with Doric columns on the facade.

It was converted into the Lyceum Palace in early-1910. It was re-named Lyceum Electric Palace in August 1910 after undergoing some improvements. Further improvments were carried out in May 1911.

In the early-1920’s it was taken over by the Liverpool based Bedford Cinemas circuit. In May 1928, it became part of the Gaumont British Theatres chain. In 1930 and again in 1931, the Lyceum Cinema suffered some damage from a couple of small fires. On 31st December 1931, the building was destroyed in a major fire.

The remains of the Lyceum Cinema were demolished in March 1933, and Gaumont British Theatres built their new Gaumont Palace Theatre on the site.