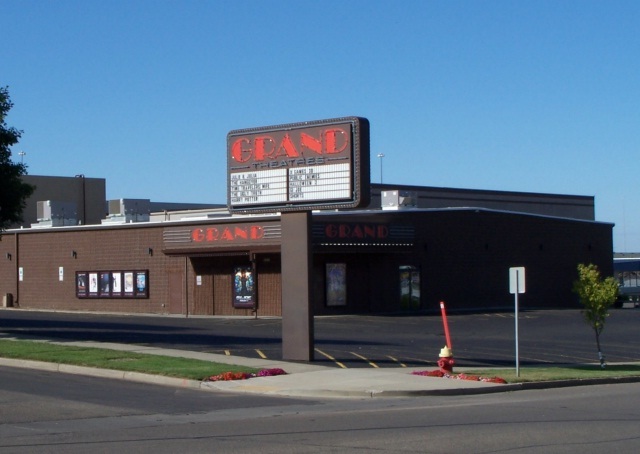 Originally opened as a twin screen theatre November 16, 1984. On January 30, 1987 it became a triple screen theatre. On July 23, 1993 it became a 6-screen theatre. On March 16, 2001 it reopened after a complete renovation with three more screens. The grand lobby took on a Egyptian style appearance after the remodel with columns coming down into the concession stand and statues on each side of the box office and throughout the lobby. A lot of marble effect was used in the remodel throughout the theatre. Large artificial palm trees were placed throughout the lobby to add to the effect. The remodel made this theatre a real movie going experience. Sort of like the Golden Years of the movie palaces. Another three screens were added, and by 2013 it had a total of 23 screens. By 2015 it had 22 screens.

The Grand has fifteen screens.

It seems that Bismarck has plenty of movie theatres.You guys must really like going to movies up there!

This is a beautiful theater. I saw Super 8 with the family in one of the giant screen theaters last weekend. I’d like to thank the management and workers of Grand Theatres for doing such a fine job. Amazing experience.

Currently going through another renovation on several of the older theaters, installing stadium seating and redoing the interiors.

And there were originally four screens, not nine.

Just completed an expansion to 23 screens, the biggest theater in ND!

Listed on website as 22 screens, not 23. A screen may had been shut down between 2014-2015. Maybe the largest Egyptian-styled cinema in the world.

Found more information for this cinema. * November 16th, 1984 opened as a twin cinema

more ads in the photo section.