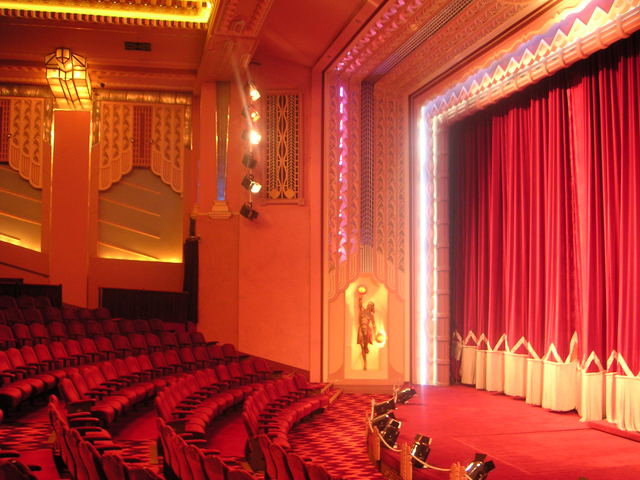 The Art Deco style Orpheum Theatre, located in the north Sydney suburb of Cremorne, opened on 4th October 1935 with 1,735 seats. It was the second of the Orpheum Theatres in Sydney built by the Virgona family (The first Orpheum Theatre was in the suburb of North Sydney, but now lies underneath the tarmac of the main freeway leading to the Sydney Harbour Bridge).

The Orpheum Theatre, Cremorne was designed on strictly modern lines, and was regarded in 1935 as one of the most up-to-date theaters in Australia. In its early days, the theater was also used for stage productions, having a large stage and fly tower.

In 1971, the Orpheum Theatre was ‘for sale’ as a redevelopment site, but thankfully, it was not sold. It remained a family operated cinema until its closure in 1979. In 1977, it was classified by the National Trust of New South Wales. In fact, the Australian Cinema and Theatre Society held its inaugral meeting at the theater in April 1982, and in 2002, the group celebrated its 20th anniversary there.

The theatre has changed very little over the years. Its angular decoration is in the jazz style of the popular ‘kitsch’ Art Deco style. The theatre was later carved in half, horizontally. The stalls area became a small arcade of shops, while the dress circle was retained as a cinema.

In 1986, Australian TV personality, Mike Walsh, bought the Orpheum Theatre and restored the main auditorium to its former glory, opening it as the Hayden Orpheum Picture Palace on December 9, 1987 with the feature “Planes, Trains and Automobiles”.

The theatre boasts a massive screen and 70mm projectors. A Wurlitzer 3Manual/12Ranks theater pipe organ was installed and opened by organist Neil Jenson on 9th December 1987. The instrument was originally installed in ther Wilson Theatre, Fresno, California. It rises up from the depths of the stage for concerts, and regular film ferformances at weekends. The organ is also used for accompaniment to showings of Australian silent films.

The Orpheum Theatre has seen many changes since 1987, when a second screen was added to the former Ballroom area. This second screen is called ‘The Lounge Cinema’ and opened in early 1988, seating 167. In September 1991, the former entrance to the back stalls was opened as the ‘Hayden Cabaret Room’. This was later converted into a third screen seating 149. A fourth screen, the Virgona, opened in March 1996, seating 312. This screen was the first Art Moderne cinema to be built in Australia for almost 50 years.

In 2000, another two cinemas, also in the Art Deco/Moderne theme, were opened where the arcade of shops once stood, making a total of five new cinemas that have been built around the existing (and magnificent) original auditorium. The two new cinemas seat 205 and 140, respectively.

It was reported in July 2020 that the screen tabs in the auditoriums are being used less & less, and that the waterfall curtain in the main auditorium has been broken for over 12 months with no effort made to get it fixed and back to working order.

The photo caption is right about the “luscious” auditorium with that wonderful contour curtain shown opening. Few theares can boast such a lavish and beautiful curtain, and I wonder where they found that 4-foot-deep white fringe? If it were made by such experts as Scalamandre Silks in New York City, it would cost about US$3000 per yard! This shows one reason so few theatres ever restore the original textile ornaments. Add to this the cost and pains of flameproofing, and they are out of reach.

Jim, The white fringe was new and purchased from the UK some years back. As impressive as the curtain looks in the photo this theatre is located in the balcony only and as such does not have much in the way of length/drop, but the owners should be commended for taking the trouble to create something immaginative in this city. The red main curtain is backed up by silver satin travellers. The original theatre had a fly tower with the main curtain rising vertically, this is no longer possible as that area is occupied by rented space.

I believe the main auditorium (pictured) seats around 700.

Good on ‘ya Australia! from what ive seen on my visits down under in cities like Melbourne, Adelaide, Perth and of course Sydney- these guys know how to look after the treasures they have.

This is what a multi screen cinema should look like. If more owners were to spend the money and the attention to detail it would bring back the magic and escape of going to the movies. This place embodies all of the qualities of the old picture palaces and none of the cookie cutter attributes of the modern multi screen cinema.

Too bad none of the photo links work anymore.

You can tour the theater on their web site. Beautiful photo’s of all the auditoriums and public spaces.

It is the jewel in the crown of Australian Art Deco picture palaces. The detail in the refurbishment is extraordinary. I took several photos of some of the light fittings which can be found on this page.

Definitely not the place to see films in 70mm. Very small uncurved and slanted backwards screen(due to the steep angle of projection.)

Fringed main curtain no longer used, just silver travellers. Other auditoriums are also lacking screen tabs now as they break down and young manager feels they are no longer necessary. So sad.