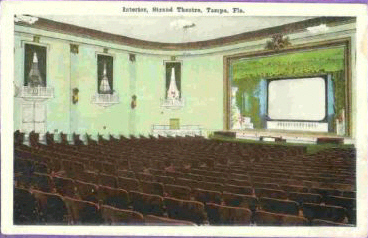 The Strand Theatre was absorbed into the Maas Brothers Department store building on that block in the late-1940s and was used for their women’s department. The Strand Theatre portion of the block was listed on the National Register of Historic Places in the late-1970’s; roughly the same time as the Tampa Theatre. Maas Brothers was absorbed into the Federated Department Store chain in the 1980s and closed this location in 1991.

The whole block including the Strand Theatre was not well maintained afterward and sold in 1998 to an investor who has not maintained it since, resulting in it’s condemnation in 2000. Plans were for the city to demolish it as the owner cannot afford to, but plans for that moved very slowly, but it eventually happened.

The Strand had already been closed for a few years by the time my interest in theatres had begun so I never had a chance to see a movie here. When the building was still standing I’d walked pass the entrance just about every day during my lunch hour curiously wondering what the theatre interior had looked like before being absorbed into Maas Brothers.

Dick, You’re right. The upper portion of the elevated floor constructed within the former theatre auditorium (the Mezzanine) became Maas' famous Suncoast Restaruant where I had lunch at many times. In looking at the photo of the auditorium interior, the walls in the restaurant evidently were left pretty much as they were when the building housed the Strand.

Each time I had lunch here I’d scope out the rear wall of the restaurant where the projection booth stood. The men’s restroom was located at just about the spot where the booth would have been. But try as I might I couldn’t find any tell-tale sign of the former booth at all.

Today that entire block is a parking lot. It’s a shame the front facade of the theatre was not salvaged. It had that classic “movie theatre” design. The Strand was a Florida State Theatre for several years prior to closing and was considered to have been a deluxe theatre in it’s day. I would have loved to have seen a movie here!

Thanks for the additional details, Nick. I should have done more exploring during those lunch visits, but I guess you never fully appreciate something until it’s gone.

I was looking at a 1955 high school yearbook, and there was an ad from the “Florida State Theaters”. It listed the Tampa, Palace, Florida, Seminole, Garden, Springs, and Hillsboro Drive-In theatres. The ad used the spelling “Theaters”, not “Theatres” in the company title, but this was probably an error by the yearbook staff.

Yes, I wish they could have preserved the facade. What a shame.

I remember seeing a bunch of pictures of the Maas Brothers interior, including the Strand portion. They disappeared from Flickr for whatever reason, and I never thought to look for any theater-y details.

Thanks guys enjoy the stories.

This photo was listed on eBay as “Interior Strand Theatre 1920s”. It’s hard to read writing on photo, it doesn’t seem to say “Strand”.

Wow! Fantastic interior photo. This had to have been taken about the time when the theatre first opened. Later shots show a slighlty more modern look with curtains within the proscenium. Thanks for posting!

This opened on October 16th, 1915. Grand opening on the photo page and below:

This disappeared from newspaper listings in 1931. It reopened on October 23rd, 1942 by Florida State Theatres. Grand opening ad in the photo section.