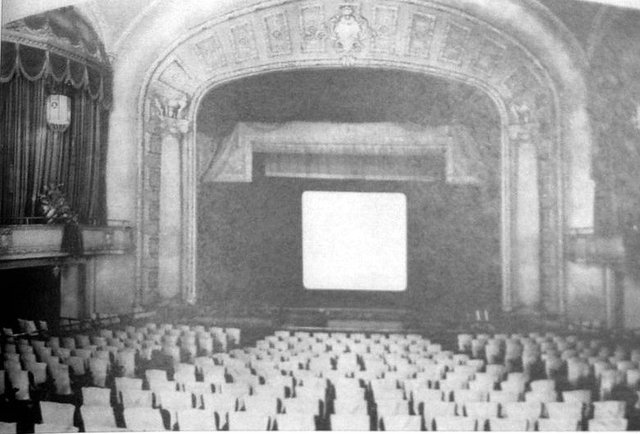 The Lincoln Square Theatre was built in 1916 by the local architectual firm of Aschauer and Waggoner. The design was in the Art Nouveau and Beaux Arts style popular of that time. It was opened October 31, 1916.

The Lincoln Square Theatre was designed similar in appearance to the ornate opera houses of the early-20th century. The theatre originally seated nearly 1,400 people and presented live theatre, concerts, opera, as well as vaudeville and silent films. It was considered a fireproof theatre and is constructed of steel and concrete and fireproof brick. It was equipped with a Barton theatre organ which had two 3 manual consoles.

Many of the most famous performers of the early decades of the 20th century tread the boards at the Lincoln Square Theatre, including Houdini, Harry Blackstone, Ethel Barrymore, and Bob Hope.

For many years the Lincoln Theatre (as it was later known, without the “Square”) was leased by the Springfield, Illinois-based Kerasotes movie theatre chain. The stage is quite large and featured two large columns that flanked the stage. The columns were topped by bowls of light held up by seahorses. The auditorium had a mezzanine comprised of box seats and a large third balcony. While much of the theatre’s original plasterwork remains, a great deal of it had been covered up or damaged.

Since the early-1990’s, the Lincoln Square Theatre has been in the midst of an ongoing restoration and renovation project, as funds permit, and much work has already been done to bring this Decatur movie palace back to its original splendor.

While work continues on the Lincoln Square Theatre, the theatre was open and was host to live entertainment, concerts and various special events throughout the year. It was closed in May 2017.

Publix refers to one of the midwest’s largest chains: Paramount Publix/Balaban & Katz/Great States Theatres. The Chicago theatres were known as B & K houses, and downstate Publix Great States. They were also affiliated with the American Broadcasting Company, and at one point were ABPT Theatres (American Broadcasting Paramount Theatres). Originally part of the Paramount chain, they were divorced by the consent decrees of the late ‘40’s and early '50’s. Eventually, Henry Plitt who worked with Leonard Goldenson at ABC as an executive with the chain’s Southern theatres took over the chain and they became Plitt Theatres. As noted above, when the Plitt circuit disolved, Kerasotes Theatres of Springfield, IL. acquired many of the downstate Publix Great States sites including this one. Fox didn’t have a major presence in the Midwest as they had in other states, so the Lincoln Square would have been a likely site for a Mickey Mouse club.

The ties between Paramount/ABC the theatres were so involved that in Chicago the ABC affiliate was located in the B & K State Lake Theatre building(and now occupies the space the theatre itself had) and had the call letters WBKB for Balaban & Katz Broadcasting.

Growing up in a small downstate Illinois town which had a Publix Great States Theatre and an independent house, even after the consent decree, I don’t remember the independent ever playing a Paramount picture. On the other hand, it had an arrangement with Warners Bros. for picture exclusivity, and until it burned in the ‘60’s I never saw a Warner logo on the screen at the Publix house.

A view of the Lincoln Theater in Decatur while it was closed and for sale can be seen here and here.

This theatre was featured on “Most Terrifying Places in America” on the Travel Channel Friday evening (12/19). Apparently it has a reputation for being haunted. The balcony and a spiral stairway backstage are particularly active. The theatre is built on the site of a hotel that had burned down, claiming a number of lives.

What happend to the front and the side of the building?

It seems that as of February 2, the theatre is up for sale. A full explanation can be found on the website http://www.lincolnsquaretheatre.com/ . It seems that the it has faces a host of issues, including botched renovations, lightning strikes, and insurance fraud, with the loss of grant money thrown in.

Part of the botched renovation included the non-replacement of the heating system, and a poorly working heating system has caused the theatre to remain closed until March of this year. It’s a shame.

This opened on October 31st, 1916. Grand opening ad from a week before in photo section.

Glimpse of the marquee in a 1952 photo added courtesy of the AmeriCar The Beautiful Facebook page.