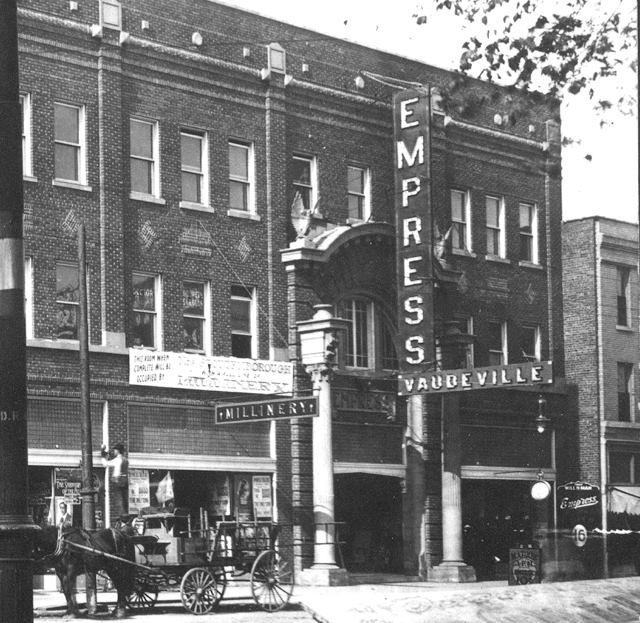 One of the first theatres in Decatur designed specifically for showing motion pictures was the Empress Theatre, opened in 1911, and built for businessman Charles Thatcher, whose own home previously occupied the site of the theater, at the corner of Water and North Streets. On September 2, 1912 it became part of the Balaban & Katz chain.

The highly ornate, Beaux-Arts style theatre was unlike any built at the time in the city, which contained a balcony, stage for live performances, and a ballroom on the building’s third floor. The Empress Theatre was the first movie house in Decatur to show a sound movie, “The Jazz Singer”, in 1928.

The Empress Building also housed other businesses, including a candy store, soda shop and drug store. The theatre was, like many of Decatur’s movie houses, rumored to be haunted. One of the ghosts was supposedly of the Empress' builder, Charles Thatcher, who died in 1923, and was later said to be seen sitting in the balcony watching the show.

After the Empress Thetare closed in 1962, it was demolished not long after to make way for a parking garage.

Here is part of an article from the Decatur Herald dated 10/6/29:

“What’s this thing for?"
"A Christmas present?"
"Huh?"
Those and similar comments have been heard by the doormen in the Lincoln, Empress and Bijou theaters all during the last week when they handed back to the patrons the stubs of their tickets. A week ago today, when Publix customs and ideas were put in action in the Great States theaters in Decatur, the practise of tearing the ticket in two and handing the patron back the end bearing the number was instituted. The plan is new to Decatur movie fans and has been the cause for much bewilderment on their part.

The patron, by retaining the stubs, actually is protecting himself. It is explained that should a person pay his way into the theater and after seeing a part of the show suddenly become aware of the fact that he has seen the picture before, he could get his money back at the box officeâ€"but only upon presentation of the stub. During the last week patrons have continued to walk nonchalantly by the doorman after handing him the ticket as has been the custom previously, leaving him frantically and futiley trying to give back the receipt.

Here is part of an article from the Decatur Daily Review dated 3/15/14:

The biggest deal in amusement circles ever brought off in Decatur was the sale of the Empress theater lease Saturday night to the F. and H. Amusement Company, incorporated, of which Marcus Heiman of Chicago is the manager. The deal was made through H.K. Oldham, who represented Charles G. Powers, and has been in progress for the past three or four weeks.

Rollin Mallory will manage the theater and Herbert George will remain as treasurer. All the old attaches of the theater, as well as the orchestra, will be retained. The new owners expect to make some extensive improvements in the theater and will keep the attractions up to a high standard. Frank Owens will retain his lease on the check room and candy privileges. His lease has three years from next August yet to run, and he has the privilege of renewing it for five more years at a value for rental to be fixed by disinterested parties.

A. Sigfreid stated: “The F. and H. company is a strong combination. They wanted the Empress theater because it is right in their territory, and they paid us a good price for it. They are building a new theater in Rockford and another in Champaign, and will also open a new theater in Terre Haute this year. They have two in Springfield, two in Champaign and one in Urbana, so this is on a direct route. I agreed to the sale because I am getting old, and to continue in the vaudeville business would, I believe, shorten my life ten years.â€

In addition to the Empress, the F. and H. Amusement company owns the
following theaters:

This opened on September 2nd, 1912. Grand opening ad in photo section. It was part of the Balaban and Katz Great States circuit.