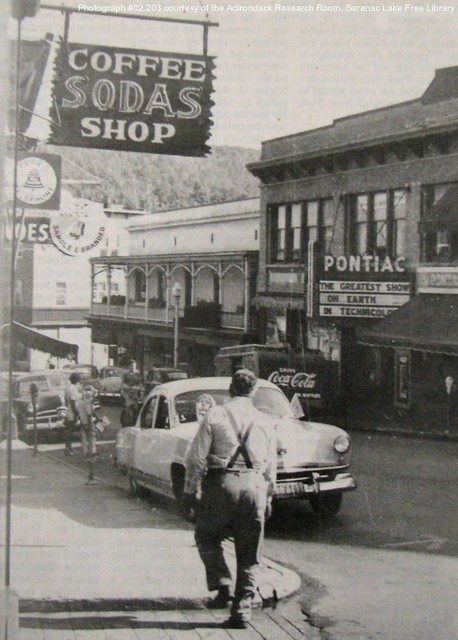 I saw the Pontiac Theatre only once and only the exterior, prior to its demise on December 19, 1978. The week that the Pontiac Theatre burned down it was screening the movie, “Foul Play” and even more ironic was that next week it was to have screened, “Up In Smoke”.

The theatre was designed by architects Scopes and Fuestmann and was built in 1917. Originally the theatre building was comprised of two storefronts, a bowling alley and a billard room. It was equipped with a Wurlitzer theatre pipe organ. In 1926, the owners, the Pontiac Theatre Corp. did like most of the independents in that area did– they sold to the Schine chain. After the dismantling of the Schine chain, the theatre was purchased by the Pontiac Entertainment Corp. Their ownership continued until the theatre burned.

I remember the marquee had a painting of an Indian at the top of the triangle. I also thought the theatre was closed when I saw it probably around 1977, but the archives mention no closing prior to its fire. I probably thought it was closed because a huge chandelier was lying on the floor in the foyer. I learned from archive photos that this was not the chandelier being used at the time I saw the theatre. The one on the foyer floor was probably just waiting to be removed by someone.

Another highlight during the Pontiac Theatre’s existence was the world premiere showing of the 1954 release, “The Silver Chalice”. Much of the movie had been filmed on location in Saranac Lake.

The Pontiac did have a balcony and judging from the photos which I viewed in the Saranac Lake Free Library’s, Adirondack Room, I estimate seating at somewhere betwwen 800 and l000. The renovation which took place during the early years of the Schine ownership, in my opinion, vastly improved the interior appearance of the theatre. I have a nice interior photo of the Pontiac from 1941. If I ever get my website going, I’ll put add a link.

I think this is the place where I snuck in to see Spartacus. It was the summer 1962 and I was
working at the Syracuse Boy scout Camp at Sabattis. Went there with a couple of guys on my work crew when we had a day off. We walked in—no one was at the ticket booth and watched the movie.

Around 1970 or so the Pontiac set aside every Wednesday night as “buck night” — all seats $1.00. They attracted a large crowd from nearby Paul Smiths College, a culinary school that managed the dining room of the Hotel Saranac, next door to the Pontiac Theater.

Trivia fact: The village of Paul Smiths was the last place in the United States to have old crank-style telephones where you turned the crank to get the operator on the line and gave her the number you wanted to call. That was also as late as 1970, I believe.

An article in the February 20, 1920 Plattsburgh Sentinel mentions that the Pontiac Company of Saranac Lake is negotiating for the purchase of the Colonial Theatre in Saranac Lake. I don’t know if this is the same theatre or not.

Gregg: The Colonial was a different theater, not yet listed at Cinema Treasures (I’ll submit it tonight.) It was located at 55 Broadway, and opened in 1912. About 1929 it was converted into a grocery store, and the building was demolished in 1974.

I saw yesterday that the original Wurlitzer Theater organ from this theater that was removed after the fire in 1978 is listed in an ebay auction. The auction states that its complete and was in good condition except for the console that looks to have fire damage. It appears that its been in storage since then and never has restored or installed anywhere. It would be great to see this organ restored and put back in a theater that lost its original instrument. The auction has 5 days to go and there are no bids as of today.