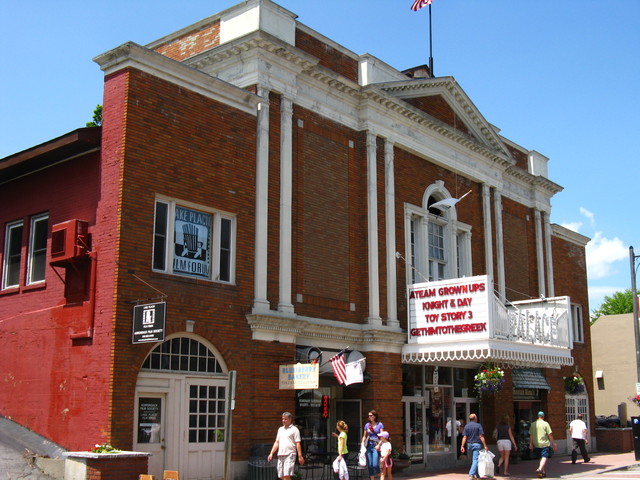 Built in 1926, the Palace Theater opened May 29, 1926 and is still showing films, though it has been divided into four screens.

Chuck1231: Nice article about the organ and vintage b/w photo. I like the marquee then compared to now. Also, the figure skating photos on either side of the marquee.

I wonder if this theatre is still a multiplex as I’m sure it was built as a single screen theatre?

Not a big fan of this design. If you tore the marquee off it could easily be a bank or city hall.

I spent Labor Day weekend in Lake Placid and was so pleasantly surprised when I saw the marquee of this theater lighting up the main street. It’s truly amazing what impact an operating theater has on the “liveliness” of a streetscape. Though time did not allow me to visit the theater (I was hoping for a rainy afternoon/didn’t get it) it appeared that the theater was doing well. It was great to see.

I worked with Ray Durkee to restore the organ in 1970, although Ray did the brunt of the work. He and I took turns playing it before shows. The theatre had a huge old American flag with 48 stars, almost as large as the screen. I forget if it was suspended in front of or behind the screen. We would always culminate our pre-show organ recital with the National Anthem as a spotlight illuminated the flag. Such fun!

I remember seeing “Harold and Maude” at the Palace before it opened widely. It may have been a sneak preview. Also “Myra Breckenridge” while sitting in the balcony in front of a row of teenage boys from the Northwood School who seemed rather enamored of Racquel Welsh.

In 1955 a cinemascope screen was installed at the Palace. It was a “Raytone Silver Screen”, the same type as in the NYC Paramount.

An article about this classic theater with photos.