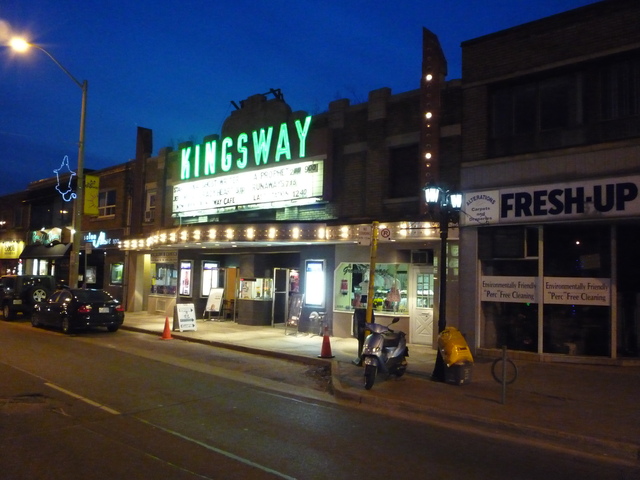 The Kingsway Theatre opened in 1939 with a seating capacity for 700. It was closed in 2006. After renovations were carried out, the Kingsway Theatre reopened on January 2, 2009, with “The Boy in the Striped Pajamas” and “Rachel Getting Married”.

Please note that Cinema Treasures has once again removed comments, links, etc. that refer to an ongoing feud between one party and the operators of this theater. Cinema Treasures is not a place for this conversation and will not be a venue for this kind of debate. Any additional postings about this issue will also be deleted.

The Kingsway was an operation of Twenthieth Century Theatres (Twinex) who were partners of Famous Players Canadian Corp. Nice to see that it is operating again. Located in the West end of Toronto in what used to be a better class of area!!

Anyone know WHERE the second screen is for this theatre? They don’t mention a thing about it on their web site, but obviously with twice as many films playing there now, and overlapping start times they have more than one screen. Years ago, there was a small “screening room” on the upper level with a separate entrance, wondering if that is open again. You would think that something would be said on their web site about two screens.

This theatre was twinned by splitting the theatre down the middle with a wall!! The old screening room hasn’t been used for years — but in 1976 I saw a movie there!

No there is no wall down the middle of the theatre. The main auditorium is intact – as it was in 1939. The second floor screening room was reopened – used to be known as the Nostalgia Cinema – it now once again plays films. 30 theatre seats(same seats as the main theatre) with film and digital projection and full Digital Dolby sound.

You would think something would be mentioned on the web site of having a second screen now open.

All announcements are made on our Facebook page. If you join our group – all the news feeds and new films are there. You can link through our webpage to Facebook or the link below.

Visited the Kingsway tonight for the first time in years for a showing of Purple Rain. Since the last time I visited, they are now licensed to serve alcohol, and have a small café out front in the lobby area. Seating is very comfortable, and there are four armchairs at the rear of the main auditorium. Show up early for the “VIP” area.

The Kingsway is ‘alive and well’ after the pandemic.

A look at the marquee and outside featured at appx the 10:36 mark of this video