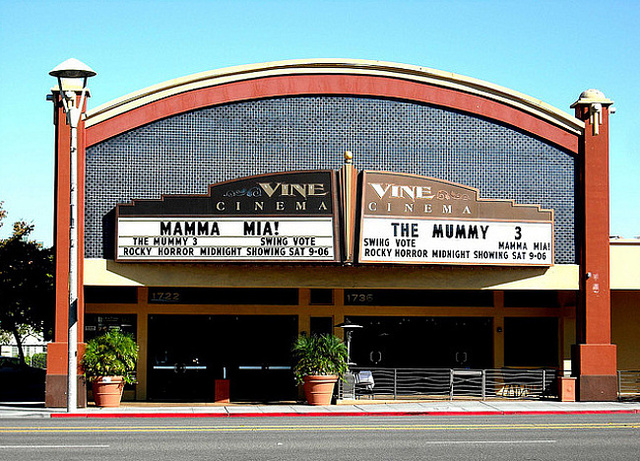 A long-standing Livermore theater; originally a single-screen, it was opened as the Vine Theatre December 26, 1956. It replaced the State Theatre which had closed on December 22m, 1956.

It was twinned in the early-1970’s and renamed Vine Cinema.

The Vine was twinned in the early 70s, if memory serves.

What’s to become of the Vine now that the multiplex has opened? It might go back to being a second-run theatre, which is was for most of the 80s through 1992. It went back to being a first-run theatre in 1992 with the release of “Batman Returns.”

Locals weigh in on yelp.com:
http://tinyurl.com/5du5u9

Nicely remodeled with attentive and knowledgable staff. Worth a trip!

The Vine Theatre was built in 1956, according to the October 6 issue of Boxoffice which said that it would be opened in November by the Roy Cooper circuit, and would have “…about 800 seats.” But the opening was delayed, and Boxoffice of November 10 said that Ampex sound equipment had been installed in the house, which was now expected to be opened in December.

An earlier Boxoffice item about the planned theater said that West Side Theatres intended it to replace their State Theatre at Livermore.

The entry for Gale Santocono in the 1962 edition of the AIA’s American Architects Directory lists the Vine Theatre at Livermore as one of his works.

The Vine opened with “You Can’t Run Away From It” starring June Allyson and Jack Lemmon, and “7th Cavalry” with Randolph Scott.

From the Motion Picture Herald, May 12, 1956, p. 8: “Plans for building a new theatre in Livermore, Calif., to be called the Vine, have been announced by L.S. Hamm of the newly formed Southern Alameda Theatres Corporation. Designed by Gus Santacono, the 1000-seat theatre will be operated by Roy Cooper Theatres.