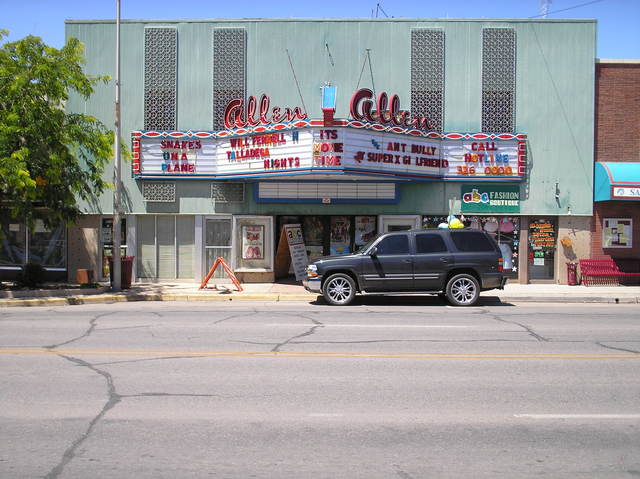 The two story building was in a cream color with decorative blocks running down the front . A triangular-shaped marquee with “Allen” on each side. A ton of neon runs all over the marquee. The Allen Theatre closed in the 1970’s, when the Allen Theatres chain started acquiring other theatres and building multi-screen theatres of their own.

In 1963, Allen Theatres also operated the Apache Twin Drive-In, the Valley Drive-In and the Totah, all in Farmington.

This ad shows the Cameo at the Allen address. Maybe a typo. The theater is in Suite B, and there is a hair salon in Suite C at 208 W. Main:
http://tinyurl.com/23ahoh

I think with a suite number it must be.

Dirty Harry is back! A 1988 photo of the colorful and unique Allen Theater in Farmington showing “The Dead Pool”

So if “Mystery Alaska” which came out in 1999, is pictured on the marquee in Lost Memory’s inauguaral 2005 post, when did the Allen Theater finally close?
The theater header/bio still indicates “closed in the 1970’s”.
Don Lewis' 1988 “The Dead Pool” pic also debunks that time frame.

Cruised through Farmington recently. The colorful Allen Theatre facade is now – and apparently has been for years – a marquee for movies playing at the circuit’s other venues.

An article in the March 30, 1957 issue of Boxoffice liberally quoted a newspaper article written by Kelly A. Crawford, Allen Theatres manager, describing the history of theaters in the county. “The first motion picture theatre was opened in the San Juan basin at Farmington in the summer of 1912 by Frank B. Allen … Not only was it one of the first movie houses in the U. S., but today the Allen Theatre is the oldest theatre in the Rocky mountain area under the same family operation.”