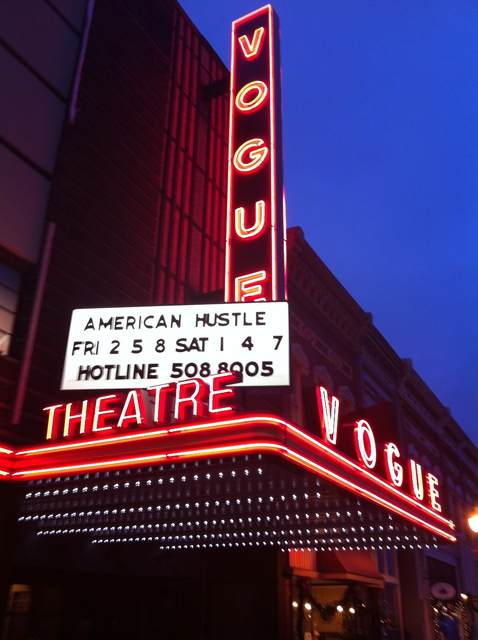 The Vogue Theatre opened in 1938. Originally a single-auditorium with 935 seats, the Vogue Theatre’s balcony was at some point coverted into an additional screen. Otherwise, the interior is remarkably original.

The theatre also has magnificent modern lights placed throughout its interior, a beautiful exterior, and its original marquee.

It was closed in 2005. It was reopened (operating initially one screen with 187 seats) on December 7, 2013. A second screen seating 45 opened in late-February/early-March 2014. The screen in the former balcony could eventually be reopened.

Vogue is scheduled to reopen under new management on July 6th

I grew up in Manistee and saw a lot of movies at the Vogue. I remember it closing and re-opening all the time. I was never sure why it couldn’t stay in business b/c it’s the ONLY theater in Manistee, and the only one for 45 min in any direction. Given all the changes to the town over the past decades we’re lucky it’s still around.

I’ve had a fantasy off and on of getting the Vogue registered as a historical building, or figuring out how to get it 5013c status, and expanding its lineup into more (any) indie films. I know if I was summering or wintering in Manistee and nearby areas, I’d hit the Vogue at least once a week if it was playing the newest indie stuff (or even if it showed classical stuff).

I’ve often wondered if Michael Moore would be a logical/helpful connection to have toward that goal, given his connection to Northern MI and support of the film festival in Traverse City.

Anyone interested in such efforts, or anyone who knows about getting historical status for buildings, feel free to email me at

This theater has been closed for several years; it needs roof and other repairs, and was recently acquired by Manistee’s Downtown Development Authority: View link

Michael Moore announced today that he is helping, along with the Manistee DDA and Manistee County Alliance For Economic Success, to re open this beautiful theater and run it as a non profit organization.

This undated news item from the Northwest Council of Michigan Governments says that the Vogue Theatre was being gutted, though some architectural features and fixtures were to be preserved and used in the rebuilt theater. Presumably, the historic exterior will be restored, but the remainder of the project will be a rebuild rather than a restoration.

The Vogue is once again operating in Manistee. Currently 1 screen is operating, as the renovation continues a second screen should open in late winter 2014.