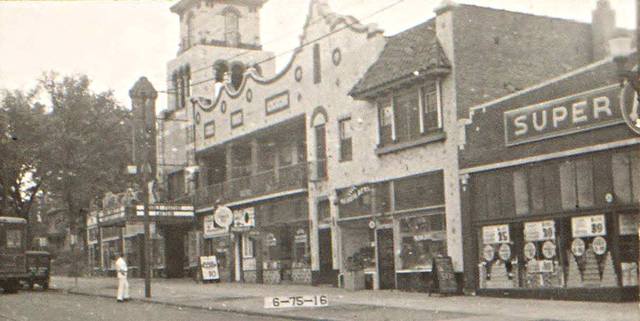 The El Rey Theatre opened on August 14, 1925 with Anita Stewart in “The Boomerang”. It was located on Independence Avenue at Prospect Boulevard, which was in the North Terrace neighborhood. It was just a block from the entrance to the park. It was renamed Vista Theatre around 1932. The theatre served this neighborhood until closing on September 19, 1965. It went into retail use.

An addition news link about the fire at the Vista Theater.

The Vista Theater building has been demolished.

This theater might have been a bit older, and a bit larger, than we thought, perhaps opening in 1925 as the El Ray (or El Rey) and seating over 1000. There was certainly the intention to build a theater on this site in 1925. Here is part of an item from the March 7, 1925, issue of The Reel Journal:

“Kansas City apparently has fallen into her stride in keeping pace with other cities in the country in theatre expansion with the announcement this week of a plan for building a 1,500 seat theatre at 2611-19 Independence Boulevard by Dr, M. A. Dickey, who recently bought the 100-foot ground frontage. The new house would be the largest theatre in that district.

“The owner plans to add shops and apartment suites to the building which is to be an imposing structure interpreting Spanish architecture. There will be five ground floor store rooms and a lobby on the boulevard frontage.

“James Watson, owner of the Benton Theatre, Northeast’s leading theatre, has purchased this new property. Mr. Watson has named the new theatre the El Ray.”The photo of the Vista does show it to have about the 100-foot frontage of the proposed house in the article, and the style of the facade was certainly Spanish Colonial Revival. A city directory or newspaper article or ads from the period 1925-1932 could reveal if there was an El Ray or El Rey Theatre at this location.

The Theater did not close in 1958 – it remained open until sometime in 1963 and was just operating on the weekends like the National Theater also on Independence Ave about 4 miles East. As an 8th grader at St. Stephen’s School, I remember going there in 1963 for a special showing of The Ten Commandaments. I think the manager’s name of Frank Morrisey who would later move to the Paramount Theater downtown as the Asst. Manager.

The interior was almost identical to the Aladdin Theater and had a lot of beautiful paintings done by Dante Consentino, who also did a lot of the art work in many of the Catholic Churches.

Wish someone could post a pic of the Vista when it was operating as a theater.

I remember when I was working for Fox Midwest in the mid to late 1950’s, the manager of the Vista and the Gladstone was Jess Spain.

KCB3Player’s recollection is correct, the Vista was indeed a “weekends only” theater in its final years. And the last ever newspaper listing for it was on Sunday, September 19, 1965, showing an almost year-old Audie Murphy western, APACHE RIFLES, and a two-year old drama, Robert Stack and Joan Crawford in THE CARETAKERS. [Kansas City Star]

This opened on August 14th, 1925. Grand opening ad in the photo section.

Given the opening date and the March, 1925 appearance of the announcement of the project, cited in my previous comment, I think we can safely assume that Victor J. DeFoe was indeed the architect of the El Rey.

As the item in The Reel Journal mentions only De Foe, I don’t know if Walter A. Besecke was involved in this project or not. The firm of DeFoe & Besecke was formed in 1925, and a biographical sketch of DeFoe says that the pair designed several theaters from 1925 to 1928, the years the partnership lasted, so it does seem likely. The El Rey did bear a strong resemblance to the firm’s Madrid Theatre, opened in 1926.

The Vista was announced in February of 1925 at the vacant lot at 2611-2619 Independence last used for a summer carnival. The new Vista opened August 14, 1925 with “The Boomerang” supported by a comedy short and live music of the Sweeney Radio Orchestra. The Spanish architectural plan was drawn by Victor J. DeFoe.