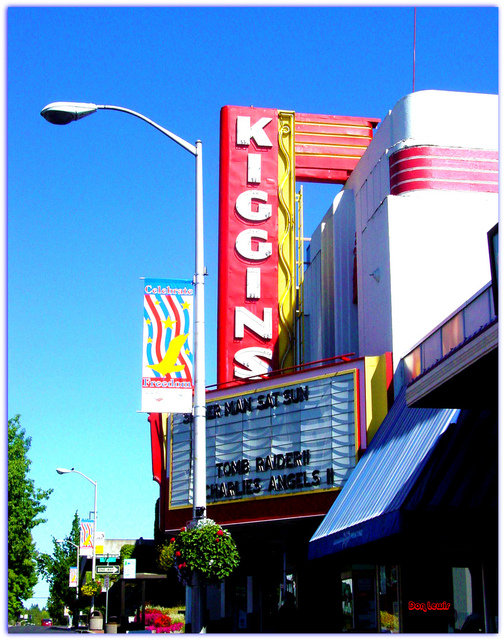 Located in downtown Vancouver, the Kiggins Theatre was named for and financed by local mayor J.P. Kiggins. It opened in 1936.

The theater’s design is austere, yet elegant. Noteworthy features include Art Deco patterns on both interior and exterior walls which are rendered in fireproof concrete and still-functioning custom light fixtures placed throughout the building.

The neon Kiggins sign is original, but the marquee was updated in the 1950’s.

The current owner (who seems a bit reluctant to be in the theater business) expects have this theatre operating again by August, 2011: View link.

Will they still be running 35mm film projectors?

The theater reopened mid-August 2011 (!) along with helping to host this year’s Columbia Gorge International Film Festival. Check out Kiggins Facebook page if you want to see photos of the remodel in progress. They also have an on-going program of events. Looks like a great community based effort.

Delighted to report the The New Kiggins Theatre has been lovigly restored to its genuine 1936 condition. From paint colors to new neon in the marquee, the building’s rennovation was executed by a number of professionals as well as a cadre of skillful volunteers. 35mm classics and digital premiers are featured. In addition, the original smoking lounge has been tricked out to serve food, beer, and wine. The early reception has been wonderful, and downtown Vancouver is coming alive!

Helping with the early part of renovations was a blast… It has turned out beautiful. Thanks Bill for fix'n her up.

An article by Helen Kent with a few photos of the Kiggins Theatre was published in Boxoffice of November 11, 1936 (additional photo on the subsequent page.) In addition, a view of the theater’s stairwell appeared as the frontispiece of that issue’s Modern Theatre section.

Already been converted to a boozer. I read in the Columbian about a month ago that they’ve filed a “Kick Starter” to put in all-electronic projection and remove its film equipment. It’s always sad to see a classic go by the wayside. I already take a dim view of boozers, but converting a theatre like this to another dime-a-dozen video hall is the ultimate form of blasphemy.

So, are you suggesting that a parking lot, like the one that currently memorializes The Castle Theater, once Vancouver’s preeminent showplace, is preferable to the Kiggins that must serve beer and wine to survive as a monument to our downtown’s heritage?

Few Vancouverites younger than the age of sixty years even saw the exterior of the Castle Theater. It ceased operating as a movie theater in 1954, and was razed in 1967 to serve as the parking lot at the corner of Evergreen and Broadway you see today.

If single-screen theaters are to survive without government subsidy or non-profit status in 2014, operators must depart from the traditional business models that governed movie houses from the advent of the sound era (1927) and the impact of television (Eisenhower administration.)

Incidentally, establishments serving beer and wine were key components to the commercial success of downtown Vancouver before Prohibition and during the Second World War.

Our Kiggins Theatre was recently placed on the National Register of Historic Places.

A parking lot would never enjoy that esteemed place in a city’s heritage district.

Since my last entry, the Kiggins has flourished as a special feature venue. In addition to first-run Independent flicks, there is a monthly “Noir Night,” frequent live old-time radio performances, private screenings of classic movies, and stand-up comedians. There are also symphonic orchestral offering as well as other features.

Kiggins Theatre is now a National Historical Site. That designation fulfills my life-long objective as a Vancouver native, and professional historian.

So proud of Dan Wyatt, “Captain” of the Kiggins Theatre, and all of his efforts in support of this long-standing monument along Vancouver’s Main Street.

With every best wish,