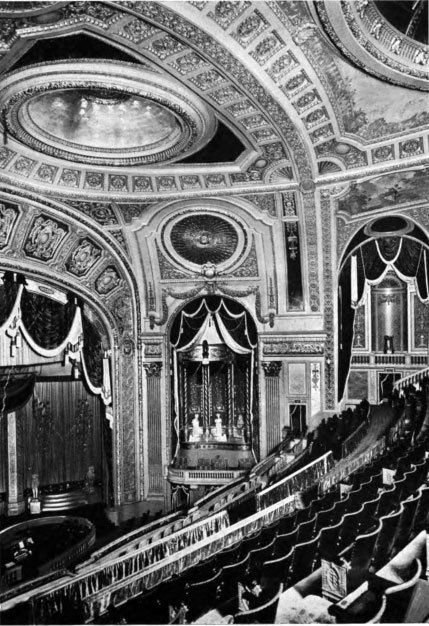 The Tivoli Theatre opened its doors on February 16, 1921, the first of the Balaban & Katz chain’s movie palaces in the Woodlawn neighborhood, opening on the once-bustling S. Cottage Grove Avenue commercial corridor near E. 63rd Street. The theatre stood just south of the southeast corner of E. 63rd Street and S. Cottage Grove Avenue, between the still standing Strand Hotel and Cinderella Ballroom (today the Grand Ballroom).

Later that same year in October 1921, the chain had great success with its new Loop venue, the Chicago Theatre, and a few years earlier, opened two houses on the North Side, the Central Park Theatre and the Riviera Theatre.

The Tivoli Theatre, designed by Rapp & Rapp, was highly ornate, decorated in the French Baroque style, glittering with gold leaf and multicolored marble; its soaring two stories high lobby was supposedly based on the Sainte-Chapelle at Versailles. The Tivoli Theatre was stocked with antique sculptures and paintings, but on the other hand, the theatre was also equipped with the most up-to-date modern ammenities such as air conditioning, and then-state-of-the-art projection equipment. Seating was provided for 3,600, with 2,200 in the orchestra and 1,400 in the balcony. It was equipped with a Wurlitzer 3 manual, 17 rank theatre pipe organ.

By the 1940’s, however, the Tivoli Theatre was just another movie house and its earlier programs of live stage shows, vaudeville, and motion pictures were a thing of the past. By the 1950’s, the theatre was starting to show its age, and Woodlawn was a quickly changing neighborhood. Even a modernization during the late-1950’s by Balaban & Katz couldn’t save the huge palace and it closed September 19, 1963. It was razed in August 1966 and was replaced by a parking lot and supermarket.

Hi Folks. Does anyone recall a pizzeria near the Tivoli, in the 1950s, perhaps across the street, called Enrico’s—or something like that? I’m writing a book on a Chicago artist who did a youthful mural there—an Italian scene—c. 1952-53. He said that pizzerias were a novelty at that time. I zoomed in on that 1955 photo someone mentioned, but didn’t see anything that looked like a restaurant. Thanks.

It costs truckloads of money to maintain one of these big places: heating, cooling, electrical bill, cleaning, taxes, building maintenance, staffing, etc. The Tivoli might not have been completely dead in the water business-wise. But Balaban & Katz was a well-run company. For what they saw coming back it might not have been worth further investment. They put considerable money into the building in the 50’s and were apparently not satisfied with the return on investment.

If the decision to close and demolish was sudden it may be because a big repair came up, like maybe a problem with the boilers, and they opted to get out instead. The building was about forty years old at the time.

I’ll give you a modern-day example. John Barleycorn, a bar which has been on Lincoln Avenue for many years, just closed. When Crain’s talked to the owner he blamed it on nearby Children’s Memorial Hospital moving downtown. He said business wasn’t in the tank. But it wasn’t nearly as lucrative as it had been with so many employees working right next door. He said it would take a few years for them to re-purpose the property and he didn’t want to wait around. He has other business ventures and decided this one wasn’t the best use of his capital.

After touring the Regal today, I drove down Cottage Grove to 63rd st. to see what was left of the Tivoli’s next door neighbors. Looked like a hotel or apartment building just north of the Tivoil about 20 stories high that was burned right through. Windows gone and in a very sad state. Reminded me of Detroit.

@LTS – Good points all. I came across an article in the Defender which talks about the closing and how the manager, Ken Blewitt, would be transferred to the Maryland around the corner. The B&K business manager interviewed for the article said something to the effect of, ‘we’ve tried to give the public what they want, but they don’t want the Tivoli’.

@BobbyS – That’s the Strand Hotel, and it’s actually in the early stages of being rehabbed into residences. The windows were recently removed for the work which is why it looks the way it does.

The plan for the hotel (Zachary Taylor Davis, arch.)actually included a theater next door, tentatively called the Calumet, but after the hotel was completed in 1919, the funding dried up and the site was then sold to B&K.

On the other side of the Tivoli, the Cinderella Tea Room (the other marquee in the early theater photos) has been rehabbed and is now known as the Grand Ballroom. The exterior stud lighting is now functional and is quite something to see.

Here is a lavish article on the Tivoli’s opening.

I believe that the Tivoli building survived beyond 1963, as I have recently found a photo of a lounge in the Strand Hotel (next door to the theater) and in the background is the Tivoli, minus the marquee, fire escapes cut down and grand front window broken, yet not boarded up. In the photo, the lounge itself is closed and has a ‘for rent’ sign in the window; I can verify that it was open and hosting concerts at least until 1965.

*just to clarify my comment of 12/8 – the lounge next door to to the Tivoli closed sometime after ‘65. I don’t think the theater ever reopened after '63 but is still standing in the photo taken after the lounge’s closing.